The City of Maroondah is an established municipality located in the eastern suburbs of Melbourne. The area is predominantly residential but includes a major retail and commercial centre at Eastland Shopping Centre in Ringwood. Settlement in Ringwood and Croydon dates from the 1840s, with land used mainly for sheep and cattle grazing, farming and timber-getting.

Population was minimal until the late 1800s, with growth through to the 1920s, spurred by the opening of the Melbourne-Lilydale railway line in the 1880s. Housing development was initially focussed around the railway line, particularly in Ringwood, Croydon, Heathmont and Ringwood East, but these ’gaps’ were filled in during the post-war period. Greenfield development continued in the northern suburbs of the City through the 1980s and 1990s.

The primary housing market role that the City of Maroondah has played during the post-war period was to provide home owning opportunities for families and prospective families from the inner and middle eastern suburbs of Melbourne. 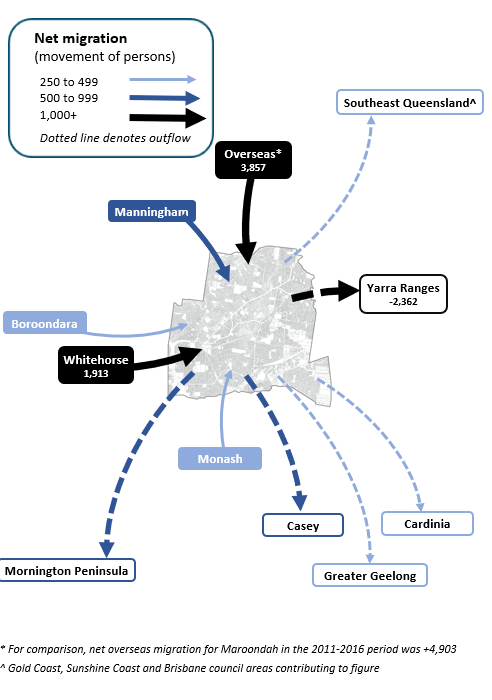 The variety of periods of settlement in the City mean that various suburbs are at quite different periods in the suburb lifecycle. In the older areas of the City such as Ringwood, Croydon and Heathmont, the original settlers have passed on, resulting in a diversity of age groups. Areas such as Ringwood North and Croydon North by contrast are expected to experience some renewal over the next 15-20 years. There is pressure for further residential development catering for existing residents of Maroondah, residents of areas to the west (Cities of Whitehorse and Manningham) and overseas. Some loss of population to developing areas further south east can be expected to continue over the forecast period.

As described above, different areas within the City of Maroondah have different functions based on both era of development and amount of new housing opportunities. Bayswater North, Croydon, Croydon South - Kilsyth, Ringwood and Ringwood East are expected to attract young adults and older adults and retirees attracted to rental stock and proximity to transport. In contrast, Croydon Hills, Croydon North, Heathmont, Kilsyth South, Ringwood North and Warranwood are expected to attract family households, as these areas regenerate. The variety of function and role of the small areas in the City of Maroondah means that population outcomes differ significantly across the LGA.

There are also significant differences in the supply of residential property within the LGA that will also have a major influence in structuring different population and household futures within the City over the forecast period. Croydon and Ringwood are expected to experience the largest amount of new residential development over the forecast period, however even within these suburbs there are differences in the types of housing expected to be developed. In the Ringwood Metropolitan Activity Centre, high density and more inner-city type housing will develop during the forecast period and in turn accomodate a more urban, younger, population thus creating smaller households. On the other hand, the remaining parts of Ringwood will continue to provide opportunity for separate house/townhouse-style development which will cater to a different segment of the housing market (i.e. young couples, couples with children, mature families and empty nesters). A similar development scenario applies to Croydon Town Centre compared to the established segments of the Croydon suburb. These two high-growth suburbs are followed by Heathmont and Ringwood East. This development will generally take the form of medium density development and development of former non-residential uses, however in the case of Croydon, some greenfield development will occur in the early forecast period. By contrast, Croydon Hills, Kilsyth South and Warranwood are not expected to add significant numbers of new dwellings over the forecast period.

Powered by .id (informed decisions) for City of Maroondah