The main development phase in the City of Manningham dates from the 1950s onward. Development spread into the City from the west and the south and around older villages such as Templestowe, Doncaster and Warrandyte. As car ownership increased and roads improved in the 1960s and 1970s, development spread across the City, with more areas being converted to residential and rural residential.

By the early 1980s, the more established suburbs such as Bulleen and Templestowe Lower began to decrease in population. This was a result of limited residential development and because households had become smaller, with the children of the original settlers growing up and leaving home. This is a process that has spread across the City, with most areas seeing a maturation of the population. This process led to an overall population decrease in the City between 1991 and 1996.

In recent years, the population has stabilised and begun to increase again as a result of higher levels of residential development. During the mid to late 1990s, surplus government land from utilities and former school sites provided more development potential and a number of larger remnant greenfield parcels were developed, notably in Sheehans Road, Bulleen. There was also an acceleration in the amount of redevelopment with unit and townhouse development more common in many areas of the City, notably Doncaster and Doncaster East. 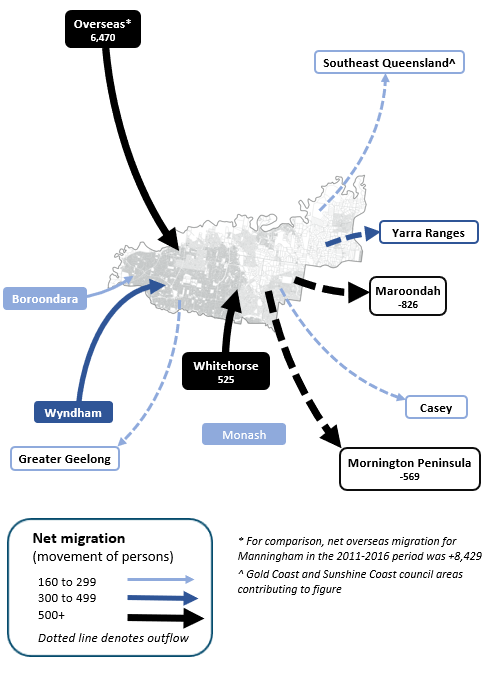 The primary housing market role that the City played in the post war era was to provide housing for young and established families. This role continues to some extent, although many areas attract more mature families, as increasing house prices and improved services has made these areas increasingly desirable. The main source of population growth in the City of Manningham tends to be from overseas, while young couples and families tend to leave the City for more affordable areas to purchase housing or to inner city locations to rent. It is assumed that a number of the migration patterns will continue into the future, most notably flows into the City from overseas and loss of persons to neighbouring areas.

Within the City of Manningham, areas have developed and will continue to evolve different roles within the housing market. Variations occur due to when areas were settled, the range of land uses in the area, developer interest and the varying planning policies in play. Bulleen and Doncaster Hill tends to gain people in their late teens and twenties due to a combination of factors. These include affordability and relative proximity to the City (Bulleen) and access to services and available rental stock (Doncaster Hill). Areas such as Doncaster East, Donvale, Park Orchards, Templestowe, Templestowe lower, Warrandyte-Warrandyte South and Wonga Park attract established and mature families, due to the type of housing stock available. Doncaster Balance attracts a combination of young adults and mature families.