Liverpool City is in Sydney’s south-western suburbs - about 25 kilometres from the Sydney GPO. The municipality is a rapidly growing residential area with substantial industrial, commercial and rural areas. Significant growth occurred post war, with the population growing from 12,000 in 1947 to 30,000 by 1960. Significant growth occurred in the 1960s when the Green Valley Housing estate (comprising the suburbs of Ashcroft, Busby, Cartwright, Heckenberg, Miller and Sadleir) was established. The population continued growing rapidly during the 1970s and 1980s, to become 98,000 by 1991. Rapid development continued in the 1990s, with the City’s population growing more than anywhere else in New South Wales, taking more than 13% of Sydney’s growth between 1991 and 2001, rising to a total of nearly 154,000 in 2001. Growth during the 1990s was largely in central Liverpool and the suburbs to the west of central Liverpool (Casula, Cecil Hills, Green Valley, Hinchinbrook, Horningsea Park, Hoxton Park, Prestons and West Hoxton), with growth also in the eastern suburb of Wattle Grove. The population continued to grow during the early 2000s, reaching nearly 205,000 by 2016, with growth largely from urban release development and redevelopment in established areas. Growth from the early 2000s continued in central Liverpool and the suburbs of Casula, Hoxton Park, Prestons and West Hoxton, with more recent growth also in the western suburbs of Edmondson Park, Elizabeth Hills and Middleton Grange, and the eastern suburbs of Holsworthy, Moorebank and Warwick Farm.

The rapid growth of the City over recent years has been fuelled by the development of family housing in urban release areas providing affordable home-owning opportunities for families and couples from the south western suburbs of Sydney. This role and function will continue, particularly as the demand for new housing is expected to remain strong across the outer south west. In addition, maturing of families within the LGA will provide additional demand, as children leave home to form households of their own within the Council area.

The pattern of growth has varied considerably across the area, with the City containing a number of suburbs that developed in the 1960s and 1970s, which have experienced very little growth and, in some cases, have lost population as people have aged and children have left home (moving into new growth areas either within Liverpool or the neighbouring Shire of Camden). 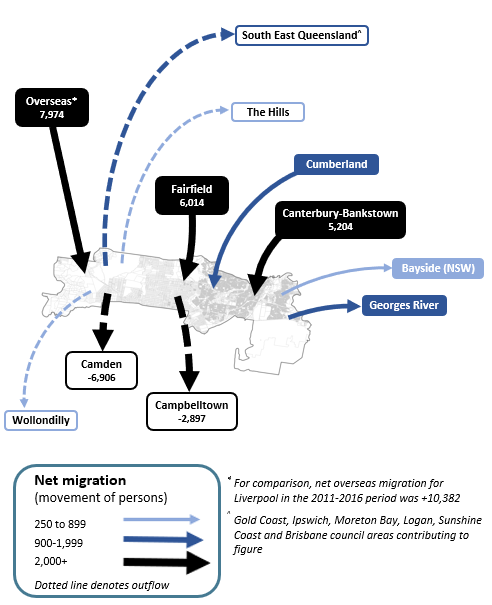 Liverpool City comprises a variety of residential roles and functions. Over the period of the forecast, these roles are expected to become more diverse, serving a much wider housing market. The City is expected to undergo further growth, especially given the impact of the future development of the Western Sydney Airport, surrounding infrastructure and supporting industries, through growth in urban release areas and redevelopment in established areas. Several State significant land release areas fall partly or fully within the City, including the South West Priority Growth Area, the Western Sydney Employment Area and Western Sydney Aerotropolis. It is likely that greenfield development will continue to play a significant role in the future of the City, with the development of Austral over the short to medium term, and likely future releases in the west in response to increasing demand because of employment opportunities associated with the airport. Despite this, a greater proportion of residential development will be medium and higher density as opposed to the traditional land and house package that has driven growth over recent decades, with the airport promoting the growth of services, employment and residential development within central Liverpool. The Edmondson Park Town Centre is anticipated to have very significant numbers of dwellings, a substantial proportion of which are expected to be higher density dwellings. Also, central Liverpool, much of which contains older residential suburbs, present significant opportunities for redevelopment, particularly in and around Liverpool Town Centre.

Older suburbs, such as Cartwright, Busby and Sadleir, are likely to undergo regeneration over the next 15 to 20 years. The housing stock in these areas is ageing and will provide opportunities to diversify the housing stock as it is renovated or redeveloped, including the possibility of lot consolidation and the development of medium density town housing, units and apartments. Many of the older areas also have a large public housing stock, which are also likely to undergo renewal and to produce a more varied housing stock, renewing the public housing stock and providing significant additional dwellings for private sale, as has occurred in the neighbouring Council areas of Campbelltown and Fairfield.

Liverpool City centre plays a unique role within the City, providing a focus for employment and education. This area attracts a younger population and has a higher proportion of private rental dwellings and apartments. It is expected that this growth will continue, with greater amounts of residential higher density development, extending into proximate areas of Warwick Farm and Moorebank. Particularly, Moore Point presents a significant redevelopment opportunity, as older industrial land is repurposed for residential use. The variety of function and role of the small areas in Liverpool City means that population outcomes differ significantly across the LGA.

Significant future residential supply has been identified across the City and this too will influence housing and population outcomes. Current residential growth is focussed on Edmondson Park, with some small parcels remaining to be developed in Middleton Grange; however, over the next few years the focus will shift to new growth fronts at Austral and Leppington – Denham Court. These are the areas with the most significant population growth over the short to mid-term, In the longer term as the current identified supply of greenfield is exhausted, there is the probability of further urban release areas within the Western Area (such as Rossmore), given the employment opportunities presented by the Airport development and the surrounding employment lands. Areas that have recently developed, such as Elizabeth Hills and Middleton Grange, in contrast, are unlikely to have much development over much of the forecast period, and the population is expected to age in place, only attracting younger families when a house is available on the market. Liverpool City Centre, meantime, has significant opportunities for densification, and areas of Warwick Farm and Moorebank are likely to undergo similar growth. Similarly, older industrial areas, such as Moor Point, present significant opportunities for rezoning and subsequent redevelopment for residential. Finally, older suburbs are likely to experience much greater rates of infill in the future as the housing stock ages and is replaced. It is also likely that there will be some element of public housing renewal, with the development of additional dwellings for sale.