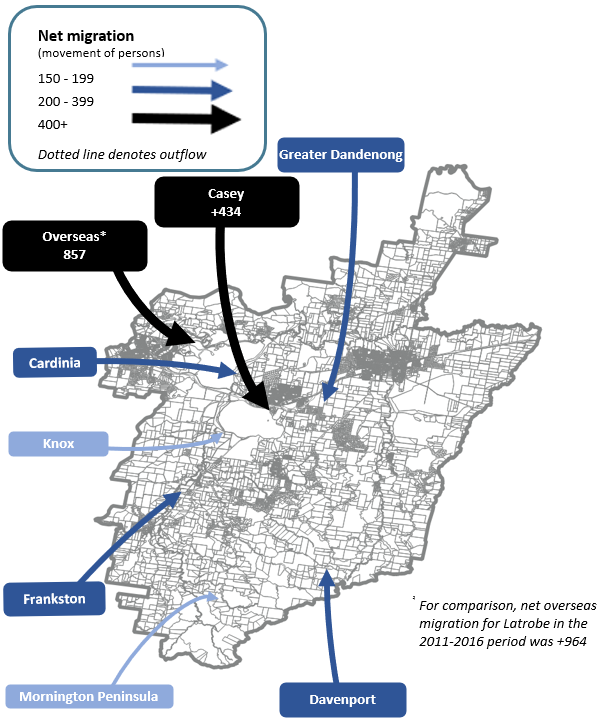 City is located in the Gippsland region of Victoria, about 150 kilometres south-east of Melbourne. It is the 4th fourth largest regional city in Victoria and the largest regional centre in eastern Victoria. Latrobe City is an urban and rural area, with the majority of the population living in the urban areas. The City includes the four major centres of Churchill, Moe-Newborough, Morwell and Traralgon and the smaller townships of Boolarra, Glengarry, Toongabbie, Traralgon South, Tyers, Yallourn North and Yinnar. Traralgon is the largest town, followed by Moe-Newborough and Morwell. The City encompasses a total land area of 1,400 square kilometres. Latrobe City is home to the most significant energy generators for Victoria, with brown coal mining used to generate electricity. The City’s growth has been strongly affected by trends in the power industry. In addition, there is significant manufacturing in the City, including the Maryvale Paper Mill and Lion Foods.

However, the majority of the population in Latrobe City is employed in services such as retail trade, health and education. As a major regional centre for Gippsland, Latrobe City is relatively self-contained in employment terms and indeed many people travel to parts of the City from the neighbouring Shires for work, education and services. Future changes to population will be associated with employment growth or decrease in these industries.

The population of Latrobe City grew substantially during the post-war period to just over 70,000 in 1991 spurred by the construction of power stations. The population has been through periods of growth and decline since then, largely due to the changes in the utilities sector.

Migration gain to Latrobe City tends to be based on families from overseas as well as young adults from neighbouring Shires. Many young people also leave the City after completing their secondary education, with a number of them migrating to Melbourne or places with strong job prospects like Queensland. It is assumed that a number of these patterns will continue into the future, most notably flows into the City from overseas and from surrounding rural areas and losses of young people to larger centres, albeit in lower numbers. Population growth has been concentrated in the newer suburbs of Traralgon.

With the size of Latrobe City and its varied land use and local economy, different areas within the City have developed different roles in the housing market. The centres of Moe - Moe South, Morwell and Newborough tend to attract young families, with affordable home owning opportunities, while Churchill is attractive to young adults due to the Federation University campus. Traralgon - Traralgon East tends to attract all age groups, catering for young and mature families with greenfield development while also attracting young adults due to the centrality of location and their proximity to services and available rental accommodation. The Rural areas of the City tend to attract a combination of young and mature families.

There are also significant differences in the supply of future residential land within the City which will also have a major influence in structuring different population and household futures over the next twenty-five years. Large new ’greenfield’ opportunities exist in fringe areas in all the major centres, most notably in Traralgon - Traralgon East, Moe - Moe South and Morwell, and to a lesser extent in Newborough and Churchill.