The City of Kwinana is located in Perth’s outer southern suburbs, between 25 and 37 kilometres south of the Perth GPO. The area is made up of residential, industrial, rural and rural residential areas as well as a major retail and commercial centre at the Kwinana Town Centre. The City includes one of Perth’s largest employment areas in the Kwinana industrial area. Settlement in Kwinana dates from the 1950s, when the Western Australian Government signed an agreement with Anglo-Persian Petroleum (now BP) to construct an oil refinery on the shores of Cockburn Sound. The development of the refinery provided the catalyst for substantial industrial development. To complement this industrial development, the WA Government began construction of an initial 333 houses in the townships of Medina and Calista in 1952. The refinery itself provided employment for over one thousand workers.

Kwinana attracted significant numbers of overseas migrants, particularly from the United Kingdom as the industrial base of the area developed through the 1950s and 1960s. A boom in industrial development saw the population of the City double between 1966 and 1971. The population of the City was relatively stable in the 1970s and 1980s before growing again in the 1990s as new residential areas in Leda, and Parmelia were developed.
Historical migration flows, City of Kwinana, 2011-2016 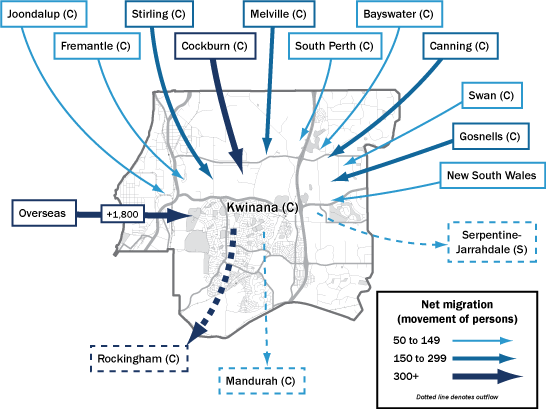 The primary housing market role that the City of Kwinana has played during the past 50 years was to provide housing opportunities for employees of local industry. In the last 10 to 15 years, the City has experienced a decline in the numbers of local jobs, combined with a significant increase in population. This has resulted from increased demand for housing in metropolitan Perth as well as improvements in transport infrastructure such as the Kwinana Freeway.

The variety of periods of settlement in the City mean that various suburbs are at quite different periods in the suburb lifecycle. In the older areas such as Medina and Calista, the original settlers have passed on, resulting in a diversity of age groups. Orelia has experienced new residential development in the last ten years resulting in a regeneration of the area. Significant levels of new residential development are expected over the forecast period in areas along the railway to Mandurah. This includes Wellard, Leda, Casuarina, Anketell and Wandi.

As described above, different areas within the City of Kwinana have slightly different functions based on both era of development and amount of new housing opportunities. Calista-Medina is expected to attract some younger families, while losing some young adults leaving home. Leda and Orelia are expected to continue to attract families in their development phase. New development areas such as Wellard and Wandi are expected to attract large number of young families with children. Parmelia-Kwinana Town Centre by contrast is expected to attract young adults in their teens and twenties in similar fashion to an inner city area. The variety of function and role of the small areas in the City of Kwinana means that population outcomes differ significantly across the LGA.

Powered by .id (informed decisions) for City of Kwinana