The City of Knox is located in Melbourne’s middle to outer eastern suburbs, between 22 and 32 kilometres east of the Melbourne GPO. The area is predominantly residential but includes a major retail and commercial centre at Knox City in Wantirna South. The City also includes employment areas in Bayswater, Scoresby and Knoxfield.

While settlement in Bayswater and Ferntree Gully dates from the 1870s, significant development of the area occurred in the post-war era as metropolitan Melbourne expanded eastwards. Housing development was initially focussed around the railway line, particularly in Bayswater and Ferntree Gully, but these ’gaps’ were filled in progressively from the end of WW2. Greenfield development has continued in the southern areas of the City until very recently. The primary housing market role that the City of Knox has played during the post-war period was to provide home owning opportunities for families and prospective families from the inner and middle eastern suburbs of Melbourne.

Different areas within the City of Knox have different functions based on both era of development and amount of new housing opportunities. Boronia, Bayswater, Knoxfield, Rowville, Scoresby and The Basin are expected to attract some families and older adults and retirees, while losing relatively large numbers of young adults leaving home. Wantirna is expected to experience a large loss through migration in young adults leaving home to establish new households elsewhere. Ferntree Gully by contrast is expected to attract family households again as the area regenerates. The variety of function and role of the small areas in the City of Knox means that population outcomes differ significantly across the LGA. 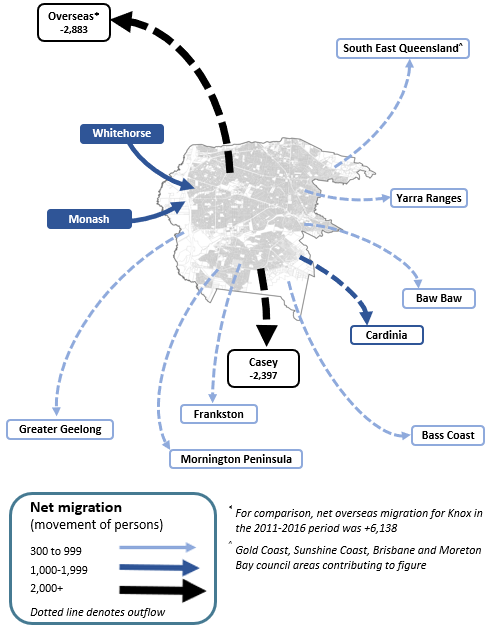 The variety of periods of settlement in the City mean that various suburbs are at quite different periods in the suburb lifecycle. In the northern and eastern areas of the City such as Bayswater, Boronia and Ferntree Gully, the original settlers have passed on, resulting in a diversity of age groups. Areas such as Wantirna and Wantirna South by contrast are expected to experience some renewal over the next 15-20 years. There is pressure for further residential development catering for existing residents of Knox, residents of areas to the west (Cities of Whitehorse and Monash) and overseas. Some loss of population to developing areas further south east can be expected to continue over the forecast period.

Powered by .id (informed decisions) for City of Knox