The Shire of Kalamunda is located on the south-eastern fringe of Perth. The Shire is residential and rural area, with some industrial areas. The bulk of the population lives on the suburban fringe of Perth, either in the more urban foothills region or the in rural residential area of the escarpment.

The original inhabitants of the Kalamunda area were the Beeloo Aboriginal people. European settlement dates from the 1860s, with land used mainly for timber-getting, orcharding and farming. Growth took place in the late 1800s and early 1900s, when the Kalamunda township was established and the area became popular as a retreat from city life. However, significant residential development in the Shire has been a relatively recent phenomenon.

The most significant development within the Shire occurred during the post-war years, particularly during the 1960s and 1970s. The population was relatively stable during the 1990s but increase significantly during the early 2000’s. Since 2001, population growth has primarily been focused around Wattle Grove and High Wycombe with lesser gains experienced in Maida Vale and Forrestfield. The primary housing market role that the Shire played over the last 20 years was to provide residential housing options for young families, generally originating in metropolitan Perth or from overseas. While growth has recently increased, the Shire of Kalamunda has lost population in net terms to local government areas to the south of Perth, such as Rockingham, Mandurah and Busselton. These trends are likely to continue into the future, as the supply of easily developable residential will become harder to find within the Shire. 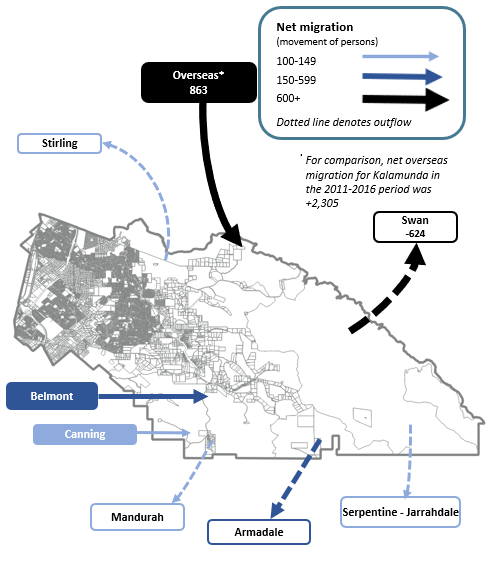 With the variety of residential and rural locations, different areas within the Shire of Kalamunda have developed different roles within the housing market. The foothills areas, such as Forrestfield, High Wycombe, Maida Vale and Wattle Grove, have greater access to Perth and tend to attract younger families and childless couples. The areas on the Escarpment, such as Gooseberry Hill, Kalamunda and Lesmurdie as well Rural East – Walliston tend to attract more mature families and retirees. Most areas of the Shire lose young adults as they seek employment and educational opportunities in larger centres. This trend is common to most areas on the periphery of major cities in Australia.

There are also significant differences in the supply of future residential land within the Shire which will also have a major influence in structuring different population and household futures over the next five to ten years. Large existing residential development opportunities are still available in Wattle Grove, Forrestfield and High Wycombe, while more established rural residential areas of the Shire such as Gooseberry Hill and Lesmurdie have relatively low amounts of new dwellings expected over the forecast period.

With the future development of a train station at Forrestfield North high density residential development is expected in surrounding areas. These new developments are expected to attract large numbers of young adults due to the ease of access central Perth provided by the train line.

Over the long-term of the forecast, significant residential urban investigation areas have been identified in Maida Vale and Wattle Grove and increasing amounts of infill development is expected in the centres of Forrestfield, High Wycombe, Kalamunda and Maida Vale.

Powered by .id (informed decisions) for City of Kalamunda