The Inner West Council area is located in Sydney’s inner western suburbs and includes 25 suburbs either part or whole. The LGA comprises around 35 square kilometres and extends from the foreshore of Sydney Harbour and the Parramatta River south to the Cooks River. While the area is predominantly residential in nature, it has historically played an important employment role in inner Sydney, particularly in manufacturing and port related activities on the Balmain Peninsula. The Council area is home to some of Sydney’s most iconic suburbs and is a destination for food and entertainment attracting a Sydney wide catchment. The original inhabitants of the area included the Wangal and Cadigal people of the Eora language group. European settlement dates to the first land grants in the late 18th and early 19th century. Significant settlement of the area commenced from the 1860s, with significant parts of the Council area dating from the Victorian period. Municipalities were formed in the 1860s and 1870s covering the present Inner West area; Balmain (1860) being the oldest. By the Second World War, the area was fully developed, with Haberfield’s development generally being complete in the inter war period. The population of the area was around 200,000 by 1921 and peaked in 1947 at around 212,000. In the postwar period, significant industrial expansion and a decrease in average household size saw a significant decrease in the population to around 175,000 by 1981. By the beginning of the 21st century, population in the area had begun to increase again, driven by new apartment construction and increased fertility rates.

The Inner West Council area has traditionally played a range of roles depending on the area. The majority of the Council area with its higher density housing and access to central Sydney’s employment and education have traditionally catered for young adults both in their early and late 20s. Areas further west have catered more for families, with Haberfield in particular catering for older families with children. Over time, it is expected that the area will continue its inner city function of catering for a younger adult population, drawn to the area’s proximity of employment, education and entertainment.

The importance of the area within the inner suburban housing market of Sydney has continued. There is significant pressure for residential development, serving both existing residents and from in-bound migration, most notably from overseas, as well as areas to the east.

It is assumed that a number of these patterns will continue into the future, notably flows into the area from the City of Sydney and eastern suburbs and from overseas, as well as loss of population to areas further west, most notably to the adjacent areas of Canterbury-Bankstown and the Burwood-Strathfield area as households move to more affordable housing on larger blocks. 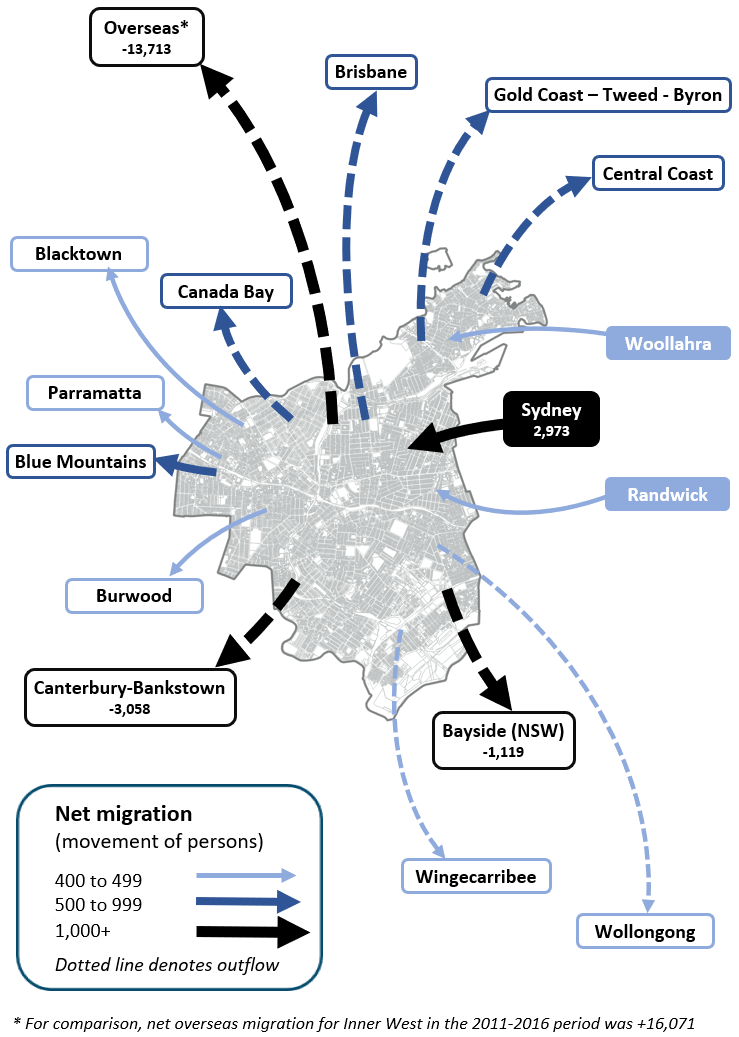 While the Inner West is characterised by medium and higher density forms attracting young adults, there are some variations within the Inner West reflecting different roles in the housing market. Areas in the north such as Balmain, Balmain East, Rozelle, Leichhardt and Birchgrove are attractive to adults in their late 20s and early 30s. Areas closer to Sydney University, such as Camperdown and Newtown attract a large share of students and young adults (18-24 years). Haberfield has more of a family profile in terms of the age groups that are attracted to the area. While suburbs further west such as Ashfield, Petersham, Marrickville and Stanmore attract 20-24 year olds in large numbers.