Hume City is a diverse local government area on Melbourne's north-western fringe, with the major commercial centres located at Broadmeadows and Sunbury. The City is diverse in its land use. Although residential areas have grown rapidly north and north west away from the Broadmeadows area over the last twenty years, agriculture and rural living remain the dominant land uses in the north and central parts of the City. Rapid residential growth over the last twenty years and future growth means that commercial centres at Craigieburn and Greenvale are likely to increase substantially. The area is a major transport hub, with the Melbourne Airport and a number of arterial roads and freeways traversing and bounding the City. The quality of the transport in the area underpins the industrial base of the City which stretches from Tullamarine, Campbellfield and Broadmeadows in the south to Somerton and Craigieburn in the north, providing another important employment source for the broader northern suburban region.

Hume City has increased significantly in population over the last twenty years, with growth around Sunbury and Craigieburn townships in the north and north-west of the City, as well as through the creation of 'new' suburbs such as Meadow Heights, Greenvale, Roxburgh Park & Mickleham. The primary housing market role that the City played over this period was to provide affordable home owning opportunities for families and prospective families from the middle and outer northern suburbs of Melbourne, as well as overseas migrants. This is expected to continue over the forecast period. 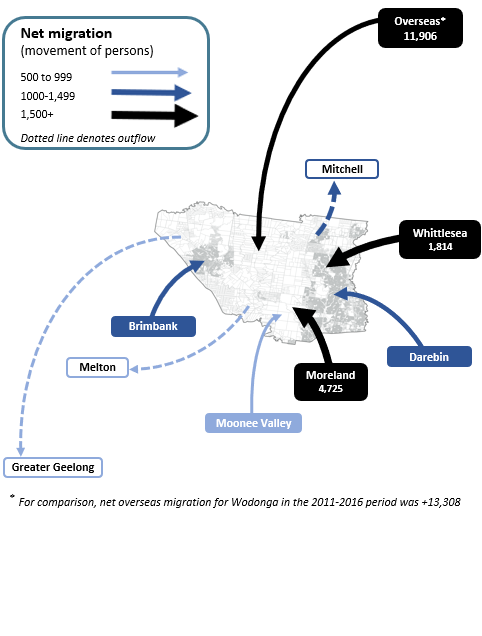 The demand for new housing in the area remains strong from new young families and couples from within Hume, as well as demand from areas to the south such as Taylors Lakes, Glenroy and Thomastown. Many of these areas were developed in the 1970s and 1980s, with children who grew up in these areas now forming their own households and moving out to new housing within the growth areas. In addition, the City of Hume is a major 'port' for overseas migrants, many of whom would be expected to continue to drive strong rates of demand in Hume City over the coming decades. It is assumed that a number of these patterns will continue into the future, most notably flows into Hume City from the south, while the maturing of families within the City notably in Greenvale, Meadow Heights, Sunbury West and Roxburgh Park should provide additional demand as children leave home to form households of their own within the City, most likely in the new growth areas. Over time, it is likely that parts of Hume City which are completing their development cycle, such as Roxburgh Park and areas of Sunbury, will provide a significant share of overall demand as the process of maturing extends to children who have grown up in the newer suburbs. The strong net flows from south to north into the City should be maintained over the 2016-2041 period.

With the progressive residential development of the City over many decades, the large size of the municipality and the broad range of land uses across the City, areas have developed different roles within the housing market. Many of the more rural parts of the City are attractive to mature families looking to upgrade to their second and third home and in most cases seeking a rural environment and lifestyle. These areas include Bulla Rural and Greenvale – Oaklands Junction - Yuroke. Some areas in the south of the City are losing substantial numbers of people in most age groups, attracting very little in-migration from elsewhere, with most available housing stock being consumed by children who have grown up in the area and formed households locally (internal household generation). In the case of Roxburgh Park and Attwood, as is demonstrated on the pages explaining the migration assumptions, previous migration patterns are likely to change and gains become losses, as the number of additional new dwellings slows and out-migration becomes more prevalent. Finally, some of the older suburbs, such as Broadmeadows and surrounds, are expected to undergo a degree of regeneration, because of significant regeneration and redevelopment opportunities (identified particularly in Broadmeadows).

There are also significant differences in the supply of residential property within the City which will also have a major influence in structuring different population and household futures over the forecast period. Large new 'greenfield' opportunities in the designated growth areas of Craigieburn, Sunbury, Greenvale, Mickleham (Merrifield) and Kalkallo (Cloverton). There are likely to be other greenfield, infill and rural residential development opportunities throughout the City, albeit at lower levels than the major growth areas identified above.