Hilltops Council is located in the South West Slopes region of NSW and is a predominantly rural area. The Council was created in 2016 via a merger of the former Young, Harden and Boorowa Shires. The largest town is Young which is located about 160km north west of Canberra and there are smaller towns at Harden - Murrumburrah and Boorowa. Much of the land is dedicated to agricultural uses such as grazing, grain growing and orcharding. From a transport perspective, the Council is served Sydney-Melbourne railway line and several major roads, including the Hume Freeway and Olympic Highway.

European settlement of the area dates from the late 1820s, with land used mainly for sheep and cattle grazing. Population was minimal until the 1860s, when gold mining was established. Growth took place during the late 1800s and into the early 1900s, aided by the opening of railway lines. Grain growing (particularly wheat) and fruit growing then became important industries. The population of the Council area increased marginally from the early 1990s, rising from about 17,900 in 1991 to nearly 18,800 in 2011, with most of this growth being in and around the township of Young.

Hilltops Council has a migration profile that is typical of regional Australia. There is significant out-migration of young adults (18-24 years), primarily for education and employment purposes. Many of these young adults would be heading for Canberra due to its proximity. Hilltops Council attracts younger families, typically with children aged 0-9 years, as well as older adults and retirees. Overall, Hilltops Council loses population to the ACT, other parts of south western NSW and parts of the NSW south coast, but gains population from the neighbouring councils of Yass Valley and Weddin, as well as parts of western and south western Sydney.
Historical migration flows, Hilltops Council area, 2011-2016 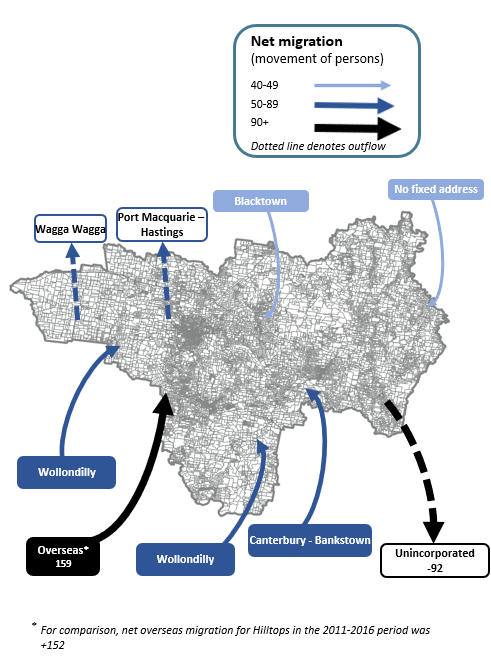 Despite the rural settlement pattern and small population size there are subtle differences in the housing role and function between the small areas. These act to influence the level of population growth across the Council area. All small areas attract small numbers of younger families and like most of regional Australia, there is a high level of out-migration of young adults. The regional town of Young attracts elderly persons, perhaps seeking better access to health and other services, whereas other areas in Hilltops tend to lose small numbers of elderly persons through migration.

Expansion of existing towns and villages in Hilltops Council is dependent on the supply of residential land but more importantly, the demand for future development. There is a large amount of land zoned for residential purposes in Young and this is where most of the assumed dwellings are located, with a slightly higher number in Young - North. On the other hand, a very modest level of new dwellings is assumed Rural Harden District and Rural Young - West. Overall, around 980 dwellings are assumed in Hilltops Council in the forecast period, resulting in a 2036 population of 19,920.