Goulburn Mulwaree Council is located between Canberra and Sydney, in the Southern Highlands region of NSW. It is predominantly a rural area with a major regional centre - Goulburn - and other smaller population centres at Marulan, Bungonia and Tarago. It is traversed by the Hume Highway and the Sydney-Melbourne railway line, providing good access to Canberra and Sydney.

European settlement dates from the 1820s, with the township of Goulburn established in the 1830s. Goulburn’s historical legacy is reflected in the large number of historic buildings and houses in the town centre and surrounding streets. Land was used mainly for grazing and agriculture. Population growth spread to the south of the township from the 1850s, spurred by growth in pastoral industries, the discovery of gold and the opening of the railway line from Sydney in 1869. Gradual growth took place from the 1960s to the 1990s, with the population increasing from about 21,000 in 1966 to almost 26,000 in 1991. The population increased slightly from the 1990s, rising to 28,360 in 2011.

In common with many regional areas with larger towns, Goulburn Mulwaree has a migration profile that reflects the in-migration of families and older adults, but with a large loss of young adults generally aged 18-24 years. Many of these young adults are leaving the area for education, employment and lifestyle opportunities in Sydney, Canberra and further afield. Historically, Goulburn Mulwaree gains population from the surrounding LGAs of Upper Lachlan, Wingecarribee and Queanbeyan-Palerang, but also from Canberra and Sydney. The Rural South small area has a high proportion of vacant dwellings, and many of these may be weekenders/holiday homes for Canberra residents in particular.
Historical migration flows, Goulburn Mulwaree, 2011-2016 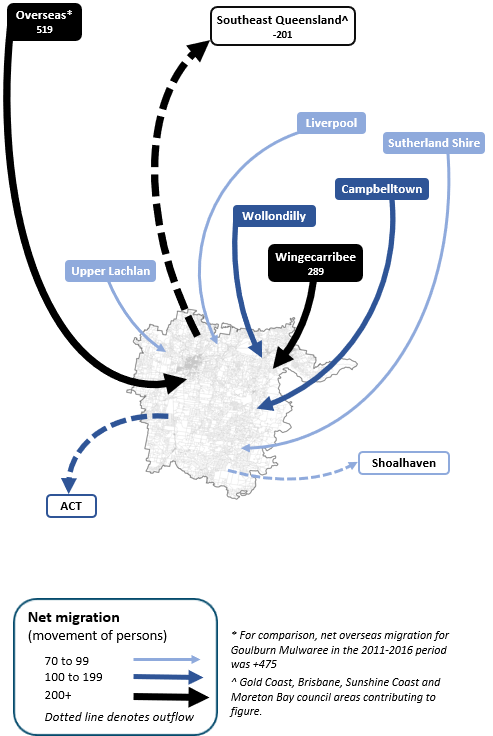 Goulburn Mulwaree’s settlement pattern, coupled with the development of the town over several decades, has resulted in differences in the role and function across its small areas. The more established parts of Goulburn tend to have minimal population change through migration, due to low demand/opportunities for new housing developments. However Goulburn (North) and Goulburn (West) have numerous development fronts and they attract families seeking home owning opportunities. Rural areas also gain families, but in modest numbers and they also lose young adults and elderly persons. The differences in the role and function are critical to understand the future population across the Goulburn Mulwaree Council.