Golden Plains Shire is located in south western Victoria, strategically positioned between Geelong and Ballarat and between 70 and 130 kilometres west of Melbourne. The Shire is predominantly rural, with major population centres at Bannockburn, Lethbridge, Teesdale and Inverleigh.

The primary housing market role that the Shire has played in this period is providing alternative housing options for older families generally originating in Geelong and to a lesser extent, Melbourne and Ballarat. There is expected to be continued demand for residential expansion within the areas of the Shire closest to Geelong both from existing residents and from external migrants, most notably from overseas and suburban Geelong. It is assumed that this pattern will continue into the future as sufficient supplies of land have been identified for development, especially in and around the township of Bannockburn. With the variety of residential and rural locations, different areas within the Shire have developed different roles within the housing market. Areas in the south east of the Shire such as Bannockburn, Batesford and rural residential subdivision are attractive to both young and mature families that have generally (due to proximity and connectivity) moved from suburban Geelong and to a lesser extent Melbourne. While areas closer to Ballarat also attract some younger families, they also experience a significant net loss of young adults and school leavers who tend to move to larger centres for education and employment. This trend is common to most rural and regional areas in Australia. 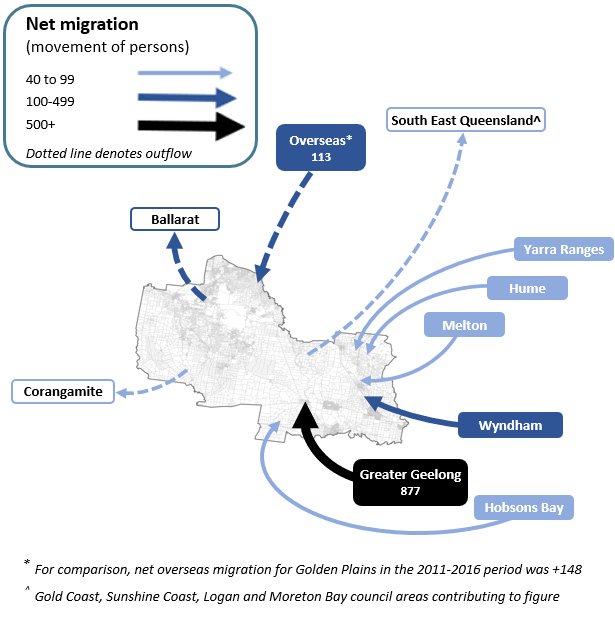 The variety of role and function of the small areas in Golden Plains Shire means that population outcomes differ across the Shire. The Bannockburn area will continue to increase in population and primary supply of new dwellings thanks to several greenfield growth areas which will provide new housing stock for young couples and young families as well as older adults, empty nesters and those people seeking a rural lifestyle. The Central East and North West small areas will experience a gain in mature adults and early retirees while losing young adults. Similar migration patterns and housing roles/function trends can be seen in the Central West and South East areas as well, with the Central West area gaining some mature families, older adults and empty nesters, while losing young adults and retirees. Meanwhile the South East small area, closer to Bannockburn and the eastern boundary closest to Geelong, will experience a gain of young and established families with a relatively stable migration balance of older adults, empty nesters and retirees throughout the forecast period.

There are also significant differences in the supply of future residential land within the Shire which will also have a major influence in structuring different population and household futures over the next five to ten years. Significant new development opportunities have been identified in Bannockburn with the Somerset Estate, Willowbrae Estate, Debonair Retreat and the future growth area in Bannockburn South leading the way. The more rural areas of the Shire have relatively low amounts of new dwellings expected over the forecast period.