The City of Glen Eira is located in Melbourne’s south eastern suburbs, 10 kilometres south east of the GPO. The City is predominantly residential in character and is well serviced with major strip shopping centres and public transport particularly in the north and west. As a result of the residential nature of the City, the overwhelming majority of the Glen Eira’s resident workers (70%) leave the city for employment, mainly to the CBD and areas surrounding Glen Eira. Major metropolitan features of the City include the Caulfield Racecourse and Monash University’s Caulfield campus. The City of Glen Eira contains a diversity of housing, ranging from 1880s mansions in suburbs such as Caulfield North and St Kilda East, to post-war growth areas such as Bentleigh East.

European settlement in the area dates from the middle of the 19th Century as farming and market gardening activities were established to cater for the growing Melbourne market. The earliest settlements were in those areas closest to the centre of Melbourne, in particular, the Caulfield North and St Kilda East areas. Early development included the construction of many large mansions and estates in the late 19th Century, some of which survive to this day.

Significant growth occurred in the Elsternwick area from the 1860s onwards as the railway line to Brighton was opened. The sections of what are now the Pakenham/Cranbourne and Frankston railway lines in Glen Eira opened in the early 1880s and encouraged growth around the stations, although large scale development in Carnegie, Glen Huntly and Murrumbeena did not occur until the immediate pre First World War and Interwar periods. Much of the dwelling and development in the northern half of Glen Eira dates from the interwar era, when large areas of Caulfield South, Elsternwick, Carnegie and Murrumbeena were developed. In the post war era, residential development expanded into the areas furthest from the railway lines, towards Bentleigh East and Warrigal Road. During the 1940s and 1950s, this area was one of the fastest growing in Melbourne. During these periods of initial development, the City catered for primarily families with children and young couples.

During this period of large scale development in the south of Glen Eira, a new phenomenon was taking place in the north. Many of the large garden allotments encouraged by the Caulfield Council in the 1920s and 1930s were well suited to redevelopment as single storey units or two storey walk up flats. The 1960s and 1970s in particular saw wide scale redevelopment of Caulfield, Carnegie, Glen Huntly and Ormond for this purpose. This development has resulted in a significant diversity of dwelling types in the City catering for a wide range of housing types. Many of these smaller format dwellings are well suited to young adults and students. 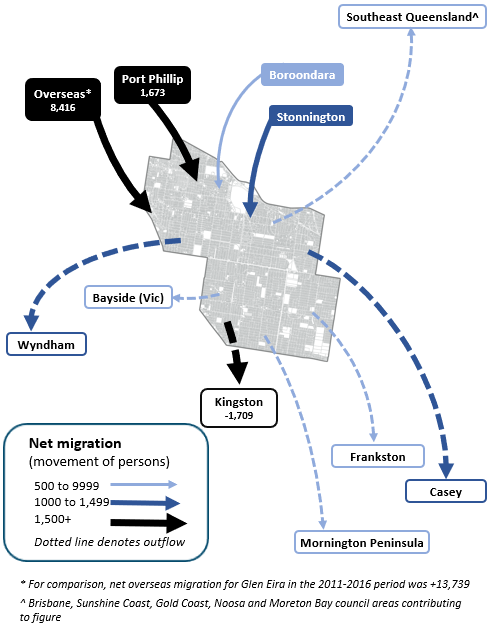 The range of dwelling types as well as access to education, employment and entertainment in the inner city has resulted in a high level of demand in the City, particularly from younger adults. The southern areas of the City with less dwelling stock diversity tend to attract a broader range of household types including families with children.

With the variety of residential locations, different areas within Glen Eira have developed different roles within the housing market. Southern suburbs are attractive to families with children. This includes McKinnon, Bentleigh and Bentleigh East. The areas closest to public transport and with large numbers of smaller format dwellings attract younger adults and students, much like the inner city areas of most major Australian cities. These areas include Carnegie, Elsternwick, Glen Huntly, Ormond, Caulfield North and East and Murrumbeena. The variety of function and role of the small areas in Glen Eira means that population outcomes differ significantly across the City.

There are also significant differences in the potential for new dwellings to be added within the City which will also have a major influence in structuring different population and household futures over the forecast period. Opportunities for new dwellings are likely to be greatest in areas around transport and education, in particular Residential Growth Zones around the Caulfield Racecourse/Monash University (Caulfield) and the Bentleigh, Carnegie and Elsternwick Activity Centres. Bentleigh East will also experience a relatively high number of new infill dwellings, but a relatively low rate of development when the large size and neighbouhood residential nature of the suburb is taken into account.

Powered by .id (informed decisions) for City of Glen Eira