East Gippsland Shire occupies the far eastern portion of Victoria and in terms of area, is one of the largest LGAs in Victoria. A significant part of the Shire is occupied by national parks, state forest and mountainous terrain in private ownership. Consequently, most development is confined to the coastal plain, which is traversed by the Princes Highway.

The largest town is Bairnsdale, located on the lower reaches of the Mitchell River in the west of the Shire. Bairnsdale has a significant regional centre function with a variety of services (high schools, TAFE, hospitals, local and state government) serving the entire East Gippsland area. Other major towns include Orbost, Lakes Entrance and Paynesville, all of which are located on the coastal plain. Smaller towns include Bruthen, Omeo, Metung and Mallacoota, the latter of which is the eastern most town in the State of Victoria.

The natural amenity of the region acts as a driver for population growth, particularly for retirees. There is a dual housing market in operation, consisting both of retirees and families, particularly with younger children. The Shire gains population through migration from surrounding regions, including Bega Valley in NSW, but most significantly from Melbourne. In common with most parts of regional Australia, East Gippsland loses young adults to Melbourne for education, employment and lifestyle reasons. 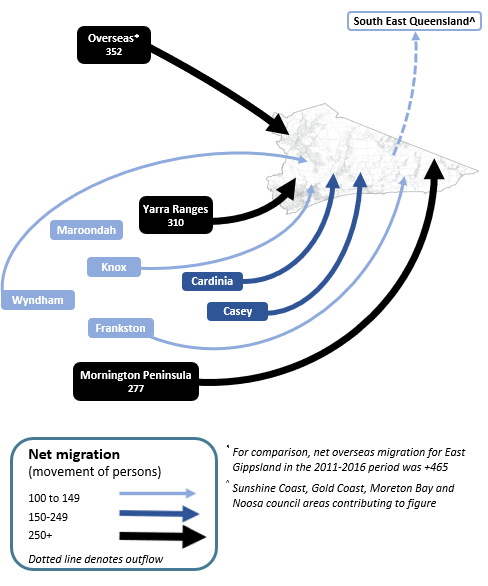 East Gippsland Shire’s natural amenity encourages tourism to the region and over time this has resulted in the growth of holiday and second homes along the coast as well as in the Gippsland Lakes area. This, combined with population decline in remote rural areas, means that dwelling vacancy rates are higher than average. In 2011, the dwelling vacancy rate was 21.8%, virtually unchanged from the 2006 figure of 21.7%. Between 2006 and 2011 vacancy rates were highest in the remote rural areas, reflecting the economic impacts of out-migration and decline of forestry employment. However in coastal towns they were stable or declined slightly over the same time period. These variations in vacancy rates have been considered, with the assumption that in coastal towns, they are likely to remain stable due to the continued demand for holiday homes, and the likelihood that these areas will continue their role and function and holiday and retirement destinations.

Future growth in East Gippsland is likely to occur in the main towns, particularly the eastern part of Bairnsdale, Paynesville and Lakes Entrance, where there is considerable residential supply and existing services. Rural residential development around Bairnsdale, particularly in the Twin Rivers area, is another important source of future supply for those seeking rural lifestyle opportunities within easy access of a major regional centre. This is anticiapted to increase over the course of the forecast, with the growth of Melbourne’s population fuelling demand for affordable retirement opportunities. Minimal growth is forecast for the more remote rural areas, continuing the trend of stable (and in parts declining) population change. Overall, the population is forecast to grow from around 45,473 in 2011 to 58,402 in 2041.