The City of Darebin is an established municipality located in the northern suburbs of Melbourne. The municipality’s land uses are relatively diverse with large commercial and industrial bases and residential areas stretching from the mid nineteenth century in Northcote to current residential developments in Bundoora and Macleod. The commercial areas of the municipality are heavily concentrated along High Street in Northcote, Thornbury, Preston and Reservoir, Plenty Road in Preston and Reservoir, Station Street, Fairfield as well as Northland shopping centre, Preston. Urban development in the City dates back to the nineteenth century, with development in Northcote and in the Preston township. Yet, it was not until the twentieth century that significant urban expansion occurred, with growth centred on the southern parts of the City. By the post-war period, development was focused on areas such as Reservoir, Kingsbury as well the remaining areas of Preston.

The primary housing market role that the City of Darebin played during this period was to provide home owning opportunities for families and prospective families from the inner northern suburbs of Melbourne as well as recent overseas migrants. The 1970s and 1980s were a period of population loss in the City as a number of areas matured, with children leaving the family home, as well as comparatively little residential development to provide housing opportunities. During the 1990s the population stabilised as new development opportunities were taken, such as the development of the remaining greenfield land in Bundoora and Macleod, the increasing construction of units in Reservoir and the conversion of industrial sites and surplus government, utility land to residential purposes. There is significant pressure for residential expansion within the City of Darebin from both existing residents and from external migrants, most notably from overseas, as well as areas to the south (the Cities of Yarra, Melbourne & Port Phillip), although affordability issues have resulted in the loss of people to the outer north who seek affordable housing in new growth areas such as the City of Whittlesea, Hume City and to the west – City of Melton. It is assumed that a number of these patterns will continue into the future, notably the large overseas flows into the City along with intensified development of higher density residential housing stock in established areas of the City of Darebin as was seen in recent years. 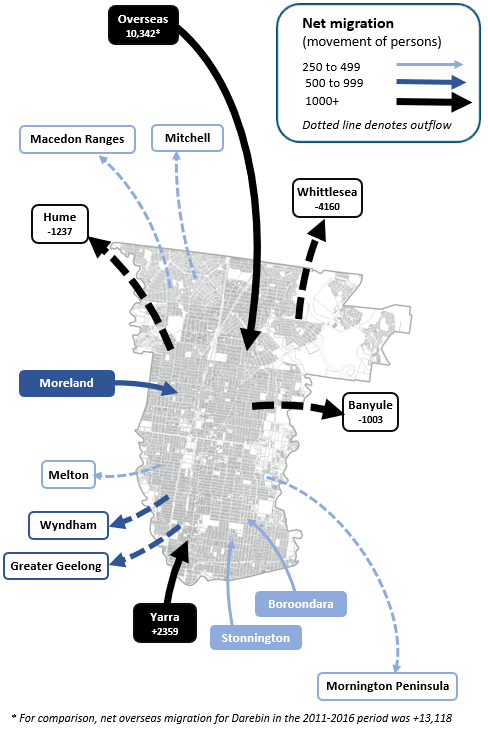 With the residential development of the City over more than a century and the large size of the municipality, areas have developed different roles within the housing market. These roles generally fall under three categories: 1. Young adults and tertiary students; 2. Established and mature families and; 3. Young to mature adults and families in conjunction with young adults and tertiary students. The first pattern affects most areas of the municipality, such as the Northcote, Fairfield, Thornbury and Preston and most of Reservoir due to the proximity to public transport and therefore connection to La Trobe and RMIT Universities to the north of the city, as well as tertiary institutions and private education providers in Melbourne. The second pattern is unique to Reservoir (Merrilands), where the housing stock, the amenity and attractiveness of the areas attract mature families. The third pattern is noteworthy in selected areas of the City such as Bundoora - Macleod and Alphington and reflects the continued availability of larger family homes as well as their proximity to public transport. This difference in function and role of the small areas in the City of Darebin means that population outcomes differ significantly across the municipality.

There are also significant differences in the supply of residential property within the City which will also have a major influence in structuring different population and household futures over the next five to twenty years. The major source of additional dwellings and households in the City will be in the larger redevelopment sites and through infill and medium density development in existing residential areas.

Already, a lot of corridor development has occurred along the High Street, St Georges Road and Plenty Road corridors in Northcote, Thornbury and Preston. These developments make use of existing availability and proximity of public transport services as well as overall amenity. In the short to medium term, some areas, such as the ‘Preston Junction’ triangle in Preston will see complete transformations from former commercial, retail and light industry landuse – to high density residential developments which will also take advantage of the existing services mentioned. Future development in some areas such as the Northland Urban Renewal Precinct, from the mid 2020s will result in complete change in dynamics of the area which will evolve from ageing industrial and large floor space commercial landuse to a mix of medium and high density residential, employment and commercial landuse in the future.

Numerous City of Darebin and State Government structure plans, housing policy and future development plans, several policy amendments and changes to zoning across the LGA as well as knowledge of areas which have restricted opportunity for growth based on zoning/covenant limitations helped identify opportunities for significant numbers of new dwellings in their respective areas and identify areas which may have fewer new dwellings in the future based on the zoning changes. High rates of residential redevelopment are expected in parts of Northcote, Thornbury, Preston and parts of Reservoir due to high rates of demand in these areas and the fact that these areas have significant opportunities for intensification and infill redevelopment, where zoning permits (larger lot sizes which allow for infill development and lot subdivision, ageing dwelling stock, overall high levels of developer demand and so on).

Powered by .id (informed decisions) for City of Darebin