The Shire of Dardanup is located in the South West Region of Western Australia, about 180 kilometres south of Perth. As of 2016 the Shire has a population of 14,390 people with a settlement pattern encompassing a mixture of urban and rural land uses. The major residential and commercial centre Eaton, along with the neighbouring Millbridge estate, contains approximately three-quarters (78%) of the Shire’s population, while the remainder lives in the townships of Dardanup and Burekup and surrounding farming areas.

The original inhabitants of the region now known as Greater Bunbury are the Indigenous Australian Nyungar people. The Bunbury area was first settled by Europeans in 1830 for use as a military post and a port to service several growing local industries including the timber industry. The Dardanup District played a role in the export of horses and timber sleepers to India in the early decades of settlement.

The region experienced a period of growth in the late 19th Century and early 20th Century with the construction of the South Western Railway line in 1893 from Perth and subsequent expansion of timber industry. 1957 marked the establishment of the town site at Eaton, which later became the Shire’s key economic and population centre.

In the early years of European settlement, the development of the Greater Bunbury region was based on the migration of subsistence farmers and families connected with emerging timber and agriculture industries. Population growth in the Shire of Dardanup remained steady throughout much of the 19th and 20th Centuries. However, a period of increased development in Eaton accelerated growth from the 1990s, as the suburban expansion of the City of Bunbury drove the residential appeal of the Shire.

The subsequent development of the Millbridge estate to the north-east of Eaton attracted a significant number of young families and first home buyers to the area. Millbridge has continued to provide housing opportunities for residents making the short commute to employment within Bunbury itself. The development a new community of Wanju, will be the most significant greenfield area in the Greater Bunbury region and will further consolidate the region’s primary housing role in providing residential opportunities for young families. It may also help realise the potential of the area to accommodate ongoing retirement migration from Perth-Peel and beyond. Wanju will allow the Shire of Dardanup assume a more central role in the intake of migrants to the region, thereby supporting strong population growth into the future. 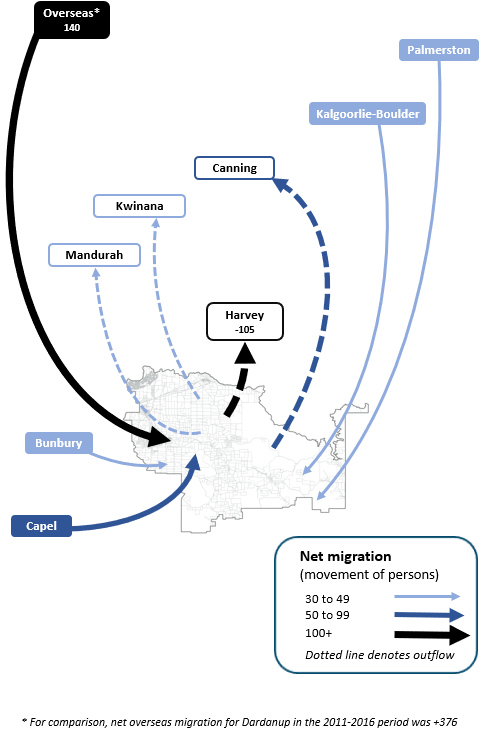 The Shire of Dardanup contains a diverse range of both suburban and rural residential housing opportunities. Along with the recently developed Millbridge estate, the established centre of Eaton provides the majority of the Shire’s housing suitable for young couples and families, which represent the area’s most prominent housing market. Eaton has also tended to attract empty nesters and retirees drawn to facilities and services in the town centre.

The townships of Dardanup and Burekup and surrounding rural areas present a housing market profile consisting of young and established families. These residents may be tied to employment in the local agriculture sector or attracted to the lifestyle benefits of rural living. The most pronounced migration characteristic of these areas is the strong out-flow of young adults seeking employment or tertiary education opportunities in larger urban centres. Although this trend is broadly reflected across the Shire of Dardanup overall, Eaton performs a role and function catering to young adults accessing work in the town of Eaton itself or nearby Bunbury.

The Shire of Dardanup has considerable capacity for future housing growth owing to the vast supply of residential land identified for development in the Wanju urban expansion area. The Millbridge estate, which has been the focus of recent residential growth in the LGA, is reaching its final phase of development. Meanwhile, Eaton has enough land available to allow it to continue to support a diverse stock of housing over the coming decades, including medium and high-density developments and aged cared living. There is potential for low-density residential expansion of the townships of Burekup and Dardanup, as well as steady development of large lots for rural living.

Powered by .id (informed decisions) for Shire of Dardanup