The Cumberland Council is located in Sydney’s western suburbs, around 25km from the CBD. It was formed in 2016 via a merger of the former councils of Holroyd, Parramatta (part) and Auburn (part). It occupies a strategic position in the Sydney metropolitan area, located adjacent to the City of Parramatta, and has good transport links (road and rail) to the CBD.

Residential development dates back to the early days of European settlement, with the establishment of farms in the Auburn and Merrylands area. Population growth increased after railways were constructed, with new suburbs forming around stations. The availability of cheap, flat land also encouraged industrial expansion, particularly in the post war period, and several pockets still exist today throughout the municipality. Industrial growth, along with higher levels of car ownership, encouraged further suburban development into areas such as Greystanes. More recently, the suburb of Pemulwuy has developed on the site of a former quarry on the western edge of the municipality.

Cumberland attracts a young age profile, primarily young adults and couples seeking relatively affordable home owning and rental accomodation close to major transport routes. Like many middle suburban areas, Cumberland tends to gain population from areas closer to the CBD eg Canterbury and Strathfield, but loses population - particularly young families - to growth areas on the urban fringe such as Blacktown and Penrith. Cumberland also receives a large number of overseas migrants, both temporary eg students and workers, and permanent settlers. The LGA has one of the highest proportions of overseas born persons in Australia.
Historical migration flows, Cumberland City Council, 2011-2016 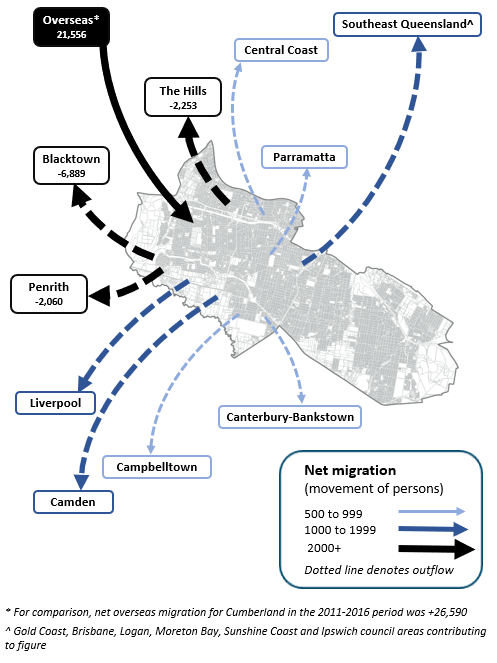 The traditional role and function of Cumberland was to provide both home owning and rental opportunities for family households. This still holds true in some suburbs, but in more recent years young adults and couples have become the dominant housing market. This is facilitated by the construction of apartments that are suited to smaller househodls, as well as the proximity to the Parramatta employment market. There are some parts of Cumberland - most notably Greystanes - that were primarily developed in the 1970s and 1980s and now have stable or declining populations as they mature and move through the suburban lifecycle. Gradually these older households will make way for younger households, thus creating a new wave of population growth and change.

At the time this forecast was prepared, Cumberland was experiencing very high rates of residential construction activity, mainly small to medium sized apartment black near railway stations. This high rate is assumed to continue in the short term due to high levels of demand, part of which has been pent up from years of relative undersupply in the Sydney housing market. In the medium to long term, as residential development opportunities are exhausted, the assumed number of new dwellings start to decline.

There are signficant spatial differences in the supply of residential land that will influence population and household futures. Significant supply has been identified in Merrylands - Holroyd, Auburn (North), Auburn (South), Wentworthville and Lidcombe (North). All these areas have the benefit of a railway station, older housing stock that is ripe for redevelopment, as well as obselete industrial and commercial land that has potential for rezoning. In contrast, there are limited opportunities for further growth in Regents Park, Merrylands West and Pemulwuy - the latter of which has almost completed its rapid development phase. Overall, the population of Cumberland Council is forecast to increase from around 203,190 in 2011, to 296,850 in 2036.