The Canberra Region Joint Organisation (CBRJO) consists of eight local government authorities located in southern New South Wales. They include the coastal councils of Eurobodalla and Bega Valley, the rural councils of Goulburn-Mulwaree, Upper Lachlan, Hilltops and Snowy Monaro and two councils located adjacent to the ACT – Yass Valley and Queanbeyan-Palerang. With eight councils covering a wide geographic area, the CBRJO is extremely diverse, not just in terms of population dynamics, but the various influences on these in each LGA.

The Canberra Region Joint Organisation (CBRJO) covers a large area (over 5 million hectares) and is comparable to the size of Costa Rica. In such a vast area, the diversity of geography and landscape which include coastline, mountains, national parks and fertile plains – all played a part in the settlement and development across the CBRJO.

Coastal areas such as Bega Valley and Eurobodalla have rural areas inland and are highly productive with dairying and grazing as the most notable agricultural industries. Urban centres around here began as small agricultural service centres and fishing ports with expansion and more rapid growth occurring in the post World War II period, especially in the last 25 years. Parts of Bega Valley and Eurobodalla closest to the coast are strongly oriented towards residential development and tourism. The inland areas are mountainous and dominated by National Park and State Forest.

Goulburn-Mulwaree, Hilltops, Snowy Monaro, Upper Lachlan and Yass Valley developed significantly during the period of gold discovery in the 1800s and the opening of the railway line from Sydney in the mid 20th century.

From the mid 1900s, the Snowy Mountains attracted surveyors, hydrographers and engineers who sought a way to harness the power of the high country’s great rivers. The Snowy Mountains Hydro-Electricity Scheme was launched in 1949 and today it provides power to three States. The establishment of this affected growth both in Snowy Monaro as well as Queanbeyan-Palerang. More recently, the establishment of the Googong Dam has also played a part in the development of the area.

Queanbeyan-Palerang’s development and population growth was slow until the development of Canberra as the nation’s capital, most notably after World War II. As many residents commute daily to Canberra from the Queanbeyan-Palerang region and the ACT and Queanbeyan are so tightly connected, growth in population in the QPRC has tended to fluctuate depending on employment changes in the Commonwealth Public Sector.

Bega Valley, Goulburn-Mulwaree and Eurobodalla gain population from the Sydney metropolitan area, parts of southern NSW and to a lesser extent – Canberra and Melbourne. Eurobodalla and Bega Valley have a dual housing market focussed on retirees and younger families. Goulburn-Mulwaree has a migration profile that reflects the in-migration of families and older adults as well.

Almost all LGAs experience a loss of young adults aged 18-24 years, representing school leavers and young independent adults, who tend to leave the area they’ve grown up in and move elsewhere for education and employment purposes. Those parts of the CBRJO closer to Canberra, such as the southern part of Yass Valley or Goulburn-Mulwaree and Queanbeyan-Palerang have closer ties to Canberra and the ACT in terms of employment and travel to work, where many residents may work in Canberra but live outside it. For example, the two main centres of Yass Valley (Yass and Murrumbateman) attract families seeking a rural living/small town environment within commuting distance to Canberra.

Queanbeyan-Palerang, despite being gazetted as a separate LGA and location in a different state, is essentially an extension of the Canberra urban area. As a result, population growth change here is heavily influenced by what is happening socially and economically in its larger neighbours. This includes the supply of residential land and employment opportunities in the Commonwealth public sector. 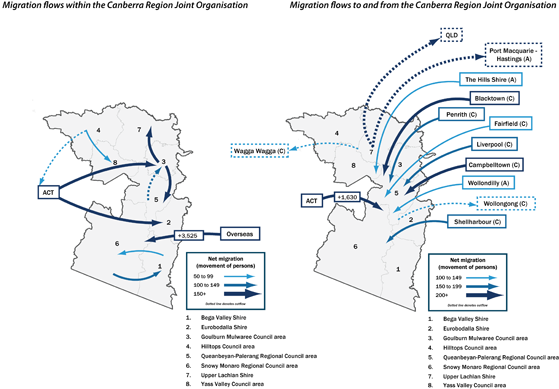 Over time, different parts of the Canberra Region Joint Organisation area have developed different roles and functions. Some of these were dictated by location, accessibility, geography and natural amenity, others by industry and employment sectors present in the area. Population increases in Canberra and the ACT generate a demand for additional housing and also increase the price of established housing in areas where population growth is occurring. The relatively large population growth and employment concentration in the ACT, has implications for housing demand and supply not just within the ACT, but also in surrounding areas of NSW. The most significant impact of the ACT on housing demand and supply in NSW, occurs in those areas closest to the ACT. (NSW Dept. of Planning and Environment 2015).

As mentioned, Bega Valley and Eurobodalla Shires show evidence of a dual housing market, catering for families as well as retirees. Golburn-Mulwaree’s main development front areas in Goulburn (North) and Goulburn (West) attract families seeking home owning opportunities. Queanbeyan-Palerang, in particular Queanbeyan and Crestwood attract a large number of persons in their late teens and early twenties from within the region and elsewhere in the CBRJO area, which is a reflection on the large amount of affordable rental accommodation and being close to the services in central Queanbeyan, but more importantly – Canberra.

Snowy Monaro has a continued gain of families with children and older adults with a region-typical loss of young adults. The Canberra Corridor section of the LGA will have gains of young couples without children and young families aged 25-34 years with children aged 0-9 years. The Upper Lachlan Shire attracts younger families, but this role is more apparent in Gunning-Dalton and District. On the other hand, Taralga-Rural Upper Lachlan has a dual housing market focussed on retirees in addition to younger families. Yass Valley will attract families, particularly those areas within commuting distance of Canberra. From the early 2030s, it is assumed that the Parkwood/West Belconnen development will extend into Yass Valley and this is likely to be attractive to younger families, including first home buyers.

There are differences in the supply of residential development opportunities across the Canberra Region Joint Organisation area which will also influence population growth and change over the duration of this forecast and beyond. Housing supply is closely related to the role and function of different LGAs within the CBRJO and therefore housing demand.

Significant new land supply has been identified in Queanbeyan-Palerang, specifically in Googong, from 2014 and South Tralee, from 2020. These areas will be the focus of growth in the region to 2036 and beyond. There are also opportunities for more medium and high density housing growth in established suburbs such as Crestwood and Queanbeyan continuing the trends of the last decade or so. The Queanbeyan-Palerang Region is assumed to contribute 33% of the CBRJO’s total residential development to 2036 (9,745 dwellings). In the Snowy Monaro Region, there is an increasing assumed rate of development going forward with several currently developing sites, such as the Highway Estate in Jindabyne and the East Camp Drive area in Cooma contributing to additions of new dwellings. The Snowy Monaro Region is assumed to contribute around 5% of the CBRJO’s total residential development to 2036 (1,412 dwellings).

Overall, almost 30,000 dwellings are assumed in the Canberra Region Joint Organisation area over the forecast period, resulting in 26,325 more households and a 2036 population approaching 265,000.