Corangamite Shire is located along the Great South Coast in Victoria’s South-West, with the largest centre at Camperdown, about 170 kilometres from Melbourne. Other large centres in the Shire include Terang, Cobden and Timboon with a large number of smaller centres such as Skipton, Port Campbell, Noorat, Derrinallum and Lismore.

The Shire is predominantly rural, with a large share of the population (around a third) employed in agricultural industries, as well as associated value-adding, notably dairy products. There are dairy processing facilities at Cobden, Simpson and Timboon. However, a large share of the population is employed in services, most notably retail trade, health and education. Tourism is also a notable employer in Corangamite Shire, especially around Port Campbell and associated with the crater lakes throughout the Shire, most notably around Camperdown. The Shire is relatively self-contained in employment terms and as a consequence future changes to population will be associated with employment growth or decrease.

The population of Corangamite Shire has decreased significantly over the last twenty five years, with consistent losses to 1996 especially in rural areas, but comparatively minor losses between 1996 and 2006. Since 2006, there is significant evidence to suggest that the population decline has stabilised. The dominant drivers for population loss during these periods were:

In terms of daily migration patterns related to "journey to work", 77% of all employed Corangamite Shire residents live and work within the Shire and 12% live in the Shire but work outside it in nearby LGAs and commute to work. (11% work location unknown - Census 2011). 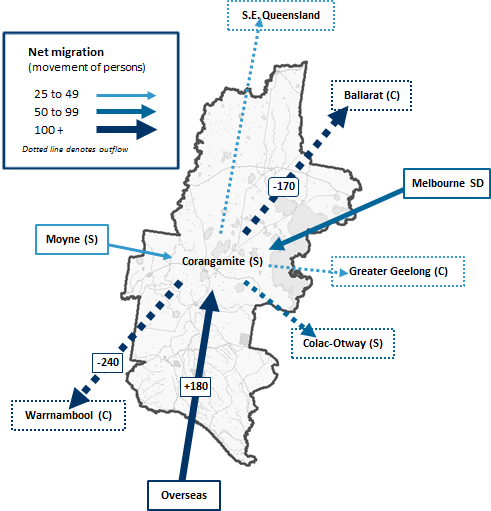 While most of the larger towns have decreased in population over the long-term, the pattern of change has seemingly altered since 1996, with Cobden experiencing increases to 2006 and Camperdown and Terang decreasing in at much smaller rates. Port Campbell has consistently grown over the last 25 years, especially from 1991-2001, while experiencing some population loss recently. Other areas of the Shire have tended to decline in population based on job losses in agriculture and departure of young people to larger urban centres, most notably in the north. The population gains tend to be based on external migration factors, such as migration from overseas and the movement of retirees and empty nesters from Melbourne. It is assumed that a number of these patterns will continue into the future, most notably flows into the Shire from overseas and losses of young people to larger centres, albeit in lower numbers.

Overall employment factors will have a major bearing on population factors in the next fifteen to twenty years. Recent development of the Otway Basin for gas production has led to new employment opportunities in the south of the Shire, especially around Port Campbell. Other potential employment growth may come from projects such as wind farms and timber production, although these opportunities are not without their challenges, as some existing industries may experience job loss as part of the process.

The population change expected over the next fifteen to twenty years will also be influenced by demand for housing and economic/employment conditions in those areas. The Council’s "Industrial Land Strategy" indicates that the Shire is well placed to attract large industrial developments, mainly to support the nationally significant dairy production industry (and a challenge is to decrease the outmigration flows of farm labour due to consolidation of agriculture). These industrial developments may include dairy processing, grain production, wholesale trade and distribution. Diversifying of employment opportunities and employment growth in education and health service areas will also benefit Corangamite Shire. The larger towns will benefit from improved road and rail connections to Melbourne and Geelong but will still require continued growth in service jobs to maintain and grow their populations. This may favour Camperdown as the largest centre, although Terang may be advantaged by its easier access than other areas in the Shire to the Warrnambool job market. It is assumed that from the late 2010s, residential development rates in the Shire will increase as Laura View Estate, Park Avenue and Blair Estate developments commence. Cobden’s growth is also likely to remain heavily linked to milk processing and its associated service functions. Port Campbell (Rural South) is advantaged by the natural beauty of its seaside location and proximity to recent and potential future employment growth. The Rural North area is likely to continue to decrease in population, as the overall size of farms continues to increase and as the small town service functions are further challenged.