Colac Otway Shire area is located in Victoria’s south west between 110 and 180 kilometres south west of Melbourne. The Shire comprises the major urban centre of Colac, the coastal resort towns of Apollo Bay and Skenes Creek, the small rural townships of Birregurra, Beeac, Cressy and Forrest, and a large rural hinterland. A large proportion of the Shire is made up of State Forest and National Park, including part of the Great Ocean Road.

Development in the Shire dates from the 1850s when pastoralists and timber-getters established themselves in the areas around Colac. Colac experienced significant growth in the first half of the 20th century as it became the major service centre to the agricultural areas to the north and the timber getting areas to the south. Apollo Bay was established in the 1860s as a port for the timber being harvested in the Otway Ranges. The construction of the Great Ocean Road in the 1930s opened up the coastal strip for development and in more recent decades Apollo Bay and the smaller coastal settlements of Skenes Creek, Kennett River and Wye River have established themselves as holiday and retirement destinations.

Like most parts of regional Australia, there is significant out migration of young adults seeking education and employment opportunities further afield. Colac-Otway Shire loses population through migration to the larger regional centres of Geelong and Ballarat. However the Shire also gains population, primarily families and retirees from Melbourne and the Western District of Victoria. The planned duplication of the Princes Highway all the way to Colac will improve transport links to the Shire but it remains to be seen whether this will translate into permanent movement, or increase demand for holiday and/or second homes. 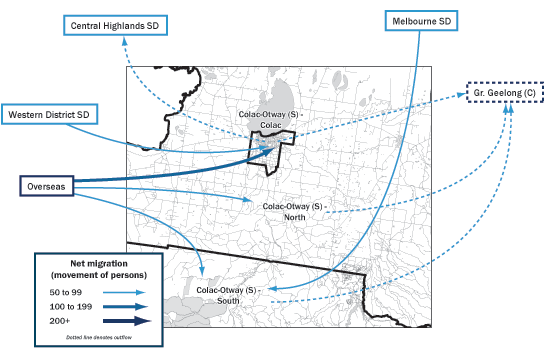 The housing market in Colac-Otway shows distinct spatial variations. Colac and the rural areas primarily provide housing for families, though in common with much of regional Australia, there is significant out-migration of young adults seeking education and employment opportunities further afield. Rural areas of the Shire have recorded some population decline in recent years due to ongoing structural change in agriculture, limited demand for new housing construction, and the ageing of the population. In contrast, Great Ocean Road - Otways has a dual housing market consisting of families and retirees. However, the vacancy rates are extremely high in this area, reflecting its role and function as a holiday destination. Future demand for housing in the Colac area is expected to predominantly come from new households forming within the Shire. By contrast, it is expected that demand for housing in the coastal areas will predominantly come from further afield, such and Geelong and Melbourne.

The different roles and functions mean that population outcomes vary across the Shire. Areas on the outskirts of Colac such as Elliminyt are attractive to both young and mature families as well as older adults. The older, more central parts of Colac attract young adults, particularly males, seeking rental accommodation, as well as retirees and elderly persons seeking housing opportunities close to health and other services. Great Ocean Road - Otways attracts young adults and families, and retirees from outside the Shire.

There are significant differences in the supply of residential property within the Shire which will have a major influence in structuring different population and household futures over the forecast period. Significant supply has been identified in Great Ocean Road - Otways but it is also assumed that vacancy rates will remain high in this area due to its role and function as a holiday destination. This means that population growth will be modest in relation to dwelling growth. Significant supply has also been identified in Elliminyt and Colac-West, particularly former rural holdings that are on the fringe of the town. In contrast, dwelling growth in the rural parts of the Shire is assumed to be modest, with minor increases (compared to the historic trend) assumed in Rural North due to additional supply identified in Beeac and the sewering of the Birregurra township.