The Central Coast Council area is located on the coast of New South Wales, between 60 and 90 kilometres north of the Sydney CBD, and about 80 kilometres south of the Newcastle CBD. It was formed in 2017 with the merger of the former Wyong Shire and City of Gosford.

Significant residential development in the Central Coast region occurred in the post war era aided by improvements in road transport and the northern expansion of metropolitan Sydney. The increase in availability of private motor transport has resulted in significant demand for residential development in coastal areas away from traditional rail-based inland townships. This has been consistent with coastal areas around Australia over this period. The construction of the freeway in the 1960s made it easier for local residents to commute to employment centres in Newcastle and Sydney.

The primary housing market role that the Central Coast Region has played in the post war period has been to provide home owning opportunities for two distinct markets - young family households and retirees, with the overwhelming demand from metropolitan Sydney

The future pattern of development is not equal across the Region, with much of the supply of detached dwellings occurring in the north of the Region (the former Wyong Shire), continuing to drive development in the Warnervale area. The south of the Region, in contrast, is likely to continue to lose population to the north, especially as the supply of detached dwellings is likely to become limited over the mid-term, with future residential development instead concentrating on the densification of centres, primarily Gosford. 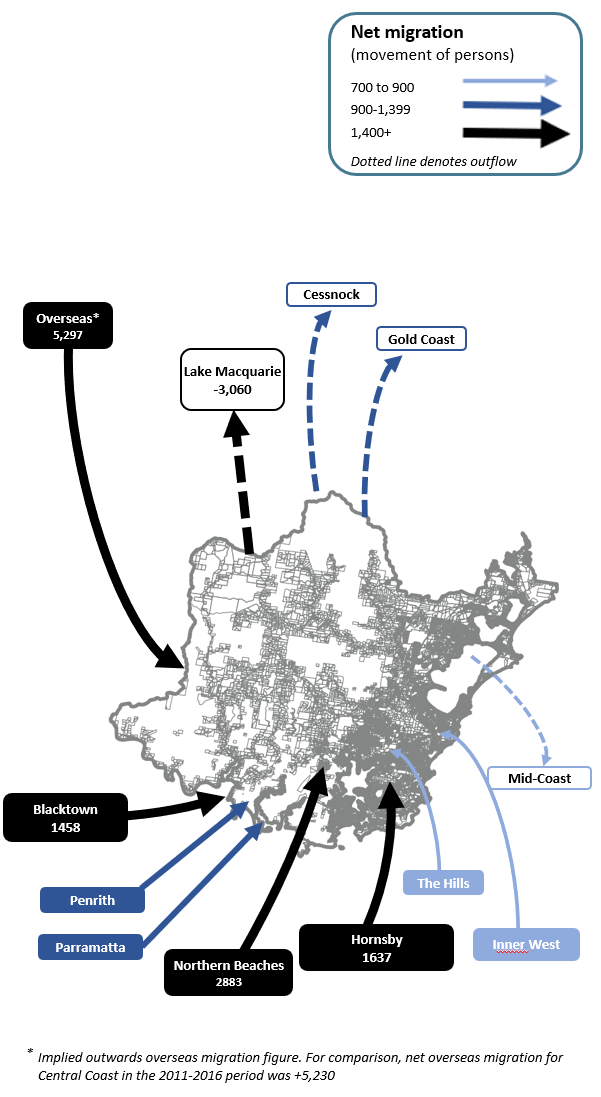 With the variety of residential areas, natural characteristics and period of development, different areas within the Central Coast Region have developed different roles within the housing market. The bulk of the areas attract a combination of families and retirees (and sometimes elderly) including, in the southern half of the Region, Avoca Beach-Picketts Valley-Copacabana-MacMasters Beach, Forresters Beach-Wamberal, Terrigal-North Avoca, Kincumber, Kincumber South-Bensville-Empire Bay, Umina Beach, Yattalunga-Saratoga-Davistown and Woy Woy-Blackwall and, to the north, areas on southern shore of Tuggerah Lake, central Wyong and to a lesser extent, Bateau Bay and Shelly Beach. Areas along the coast and lakes such The Entrance, Budgewoi, Toukley, San Remo, East Gosford, Springfield, Erina, Green Point, Point Clare and Ettalong Beach and Gorokan attract large numbers of retirees. New growth areas such as Hamlyn Terrace, Wadalba, Woongarrah and Warnervale are expected to attract predominantly a young and mature family housing market, like Blue Haven in the late 1990s and early 2000s, fuelled by relatively strong local demand created within the Central Coast as significant numbers of new households (children leaving home) seek new dwellings. Gosford-West Gosford, in contrast, attracts many young adults in line with its role as the major centre, and because of its transport links, and higher density rental stock. The variety of function and role of the small areas in the Central Coast means that population outcomes differ significantly across the Central Coast Region.

There are also significant differences in the supply of residential property within the Region which will also have a major influence in structuring different population and household futures over the next five to ten years. Significant new ’greenfield’ opportunities are being developed in Woongarrah, Wadalba and Warnervale, and Hamlyn Terrace continues to develop. Meanwhile, Gosford-West Gosford has significant potential to develop more intensively as a regional centre, with higher density residential dwellings likely to continue to develop over the forecast period, with a consequent increase in rental stock. The Entrance, North Gosford, Terrigal, Woy Woy – Blackwall, Umina Beach, Wyong and Toukley are expected to have growth in dwellings in their town centres. This will generally take the form of medium and high-rise development. These areas, and areas such as Kincumber, also have many retirement villages, which are likely to continue to develop or expand, providing housing for empty-nester and retiree households. Elsewhere, there are significant constraints to future development, with limited availability of land suitable for development. Growth in households in the coastal areas is also expected to come from the conversion of holiday dwellings to permanent residences as well as the construction of new dwellings. Finally, aged care services are likely to continue to expand on the Central Coast, prompting increases in people aged 85+.