Cardinia Shire is a relatively rural municipality on Melbourne’s south-eastern fringe. The rural areas to the north boast significant amounts of intensive horticulture, natural heritage areas, as well as semi-rural and rural-residential living, while rural areas to the south also feature a broad range of horticultural activities and dairy production. The central areas of the Shire are more diverse, featuring a mixture of residential and agricultural activities, with some commercial and industrial activities in Pakenham township. Cardinia Shire has increased significantly in population over the last twenty years, with growth around Pakenham and in the north of the Shire around Emerald and Cockatoo.

The primary housing market role that the Shire played over this period was to provide affordable home owning opportunities for families and prospective families from the south-eastern suburbs of Melbourne. After a number of decades of more incremental growth, the importance of the Shire within the south-eastern suburban housing market of Melbourne is set to increase dramatically. This is based predominantly on two factors. The first factor is the declining amount of easily developable ’greenfield’ land in the Casey to the west, where residential development opportunities in the Narre Warren South-Berwick area have been predominantly exploited. The second factor is the significant demand for new housing from new young families and couples from within Casey, as well as areas to the west, such as Dandenong, Keysborough and Rowville. This is based on the fact that many of these areas developed in the 1970s and 1980s, with strong demand from children who grew up in these areas who are now forming their own households. In addition, the City of Greater Dandenong is a major ’port’ for overseas migrants, some of whom would be expected to settle within Cardinia over the coming decades. It is assumed that a number of these patterns will continue into the future, most notably flows into the Shire of Cardinia from the west, while the maturing of families within the Shire, notably in Pakenham and areas to the north, such as Emerald, should provide additional demand, as children leave home to form households of their own within the Shire. By the end of the forecast period, it is expected that Cardinia will start to provide a significant share of its own demand as this process extends to children who have grown up in the new subdivisions of Officer, Beaconsfield and Pakenham. The strong net flows from west to east into the Shire should be maintained over the 2011-2036 period, but policy and developer intentions will in part determine whether there will be some flows from Pakenham back toward Officer.
Historical migration flows, Cardinia Shire, 2011-2016 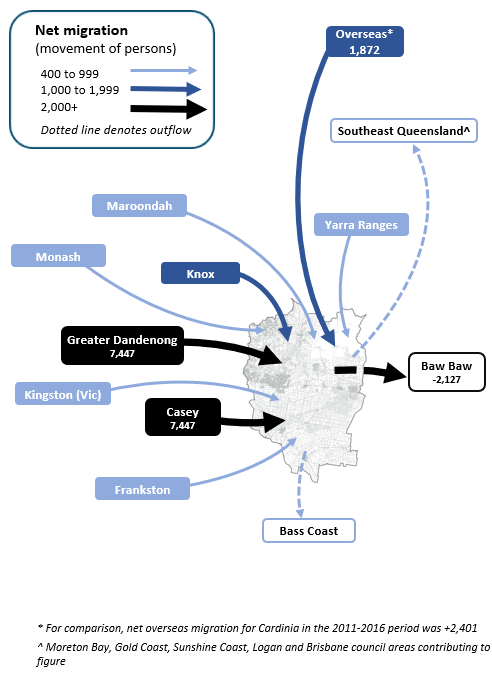 With the progressive residential development of the Shire over many decades, the large size of the municipality and the broad range of land uses across the Shire, areas have developed different roles within the housing market. Areas such as Pakenham and Beaconsfield have had significant residential development in more recent years and are attractive to couples and families seeking new housing opportunities. Many of the more rural parts of the Shire are attractive to mature families looking to upgrade to their second and third home and in most cases seeking a rural environment and lifestyle. These areas include Beaconsfield Upper, Northern Rural and Gembrook. Some areas in the north of the Shire, such as Cockatoo-Nangana, and in the east of the Shire, such as Bunyip and Nar Nar Goon-Tynong tend to attract young couples and families. In the case of Officer, previous migration patterns are likely to dwarfed by new patterns created by the wave of household forming couples and families from the west, as the area enters its growth phase. This variety of function and role of the small areas in Cardinia Shire means that population outcomes differ significantly across the municipality.

There are also significant differences in the supply of residential property within the Shire which will also have a major influence in structuring different population and household futures over the next five to twenty years. Large new ’greenfield’ opportunities have been identified in the growth corridor area, notably Pakenham Precinct, Cardinia Road Precinct, Cardinia Road Employment, Officer Precinct and Pakenham East Precinct. There are likely to be other greenfield, infill and rural residential development opportunities throughout the Shire, albeit at lower levels than the major growth areas identified above.