In 1895 the railway was expanded from Sydenham to Belmore, which spurred development, especially in the suburbs closest to Sydney, such as Hurlstone Park and Croydon Park. Rapid population growth occurred in the early 1900s to 1930s, spurred by improved access and the development of essential services. Most of the housing stock within the former City of Canterbury was built in this period. The railway was extended from Belmore to Bankstown in 1909 and further development followed with the gradual provision of water, electricity and sewerage to greater areas of the City. The post war era saw significant development, spreading southwards and westwards, reaching the suburbs further away from Sydney, such as Riverwood and Narwee by the 1950s, and then Padstow, Revesby, Chester Hill and Georges Hall. By the 1970s, the City’s residential spread was about complete.

The population of the City increased from about 142,000 in 1947 to about 267,000 in 1961, and then to about 293,000 in 1971. The population then declined slightly, falling to 280,000 in 1981. The population was relatively stable during the 1980s, then increased slightly to nearly 282,000 in 1991. The population continued to increase from the early 1990s, rising to about 319,000 in 2011, with the most rapid growth between 2006 and 2011. The recent growth is driven substantially by an intensification of existing residential areas (especially along major routes such as Canterbury Road) and town centre development, most notably in the Bankstown CBD. Population increase has also been encouraged by a slight increase in the average household size, reflecting a combination of rising housing costs (meaning young adults stay at home longer) and multi-generational families, with aged parents living with adult children.

The primary housing market role that the City has played in the post war era has been to provide relatively affordable housing for young families. This role continues to a more limited, although areas such as Liverpool and Fairfield LGAs have overtaken Canterbury Bankstown in terms of new dwellings in the last 20-30 years. Relatively high rates of infill development in the City are expected to continue, dominated by growth in the Bankstown CBD, and along main arterial routes and close to stations in centres such as Canterbury, Campsie and Lakemba and, to a lesser extent, in centres such as Wiley Park, Belmore, Croydon Park, Punchbowl and Yagoona, Sefton, Padstow and Revesby. This is based on large numbers of new medium density dwellings being established in the City, catering for a range of housing types, particularly young adults and couples. 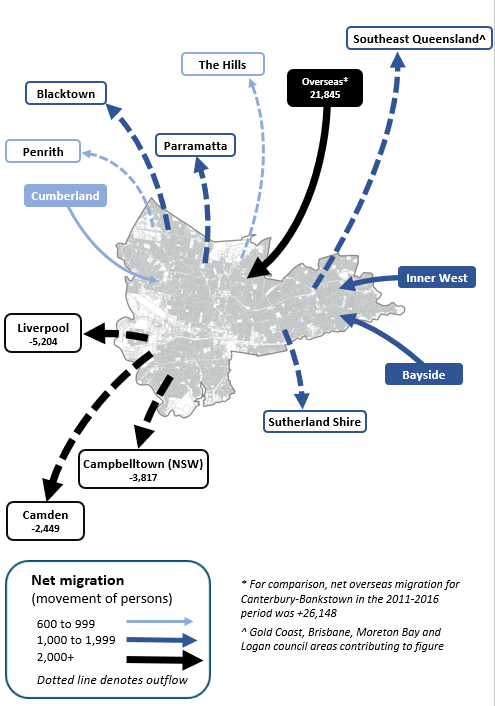 The City of Canterbury Bankstown comprises significant diversity in terms of residential and economic role and function. Bankstown CBD is the most ‘urban’ part of the City and attracts young adults to its higher density residential dwelling stock whilst losing young families and first time homebuyers looking for family type housing elsewhere (most often the new housing areas in the City of Liverpool); Wiley Park, Lakemba, Campsie-Clemton Park and Canterbury follow a similar pattern having had significant higher density development along the Canterbury Road corridor. Areas such as Ashbury, Kingswood, Earlwood, Panania, Greenacre and Sefton and Yagoona by contrast have been losing young adults as children leave home to establish households elsewhere. In Narwee, Roselands, Punchbowl, Greenacre, Sefton and Yagoona, this is likely to alter in the future as these areas gain in higher density residential stock and experience a resultant increase in their rental markets. Areas such as Bass Hill, Punchbowl and Padstow are expected to experience a net in-migration of all younger age groups owing to recent development, and potential densification. In Riverwood, the redevelopment of public housing with higher density housing is expected to transform the demographic of the area over time from an area with a large number of families and older smaller households, to a more ‘urban’ profile time with a higher proportion of young adults accessing rental accommodation within the private housing component of the redevelopment. This variety of function and role of the small areas in the City of Canterbury Bankstown means that population outcomes differ significantly across the LGA.

There are also significant differences in the supply of residential property within the City which will also have a major influence in structuring different population and household futures over the next five to twenty years. Large new medium density opportunities have been identified in the Bankstown CBD, Wiley Park, Campsie, Lakemba and Canterbury. This will increase in the future once the Sydenham to Bankstown Urban Renewal Corridor Strategy is implemented, with several town centres along the railway line having the potential to become high priority development areas. These areas will contribute significantly to the City’s population growth over the forecast period. The remaining public housing in Riverwood is likely to be redeveloped over the forecast period, leading to greater numbers of dwellings at higher densities and a more varied housing market, following the success of the Washington Park redevelopment. Belmore, Croydon Park, Punchbowl, Narwee-Beverley Hills, Greenacre-Mount Lewis-Chullora, Padstow-Padstow Heights, Yagoona, Bass Hill-Lansdowne and Panania-East Hills are also expected to add significant numbers of dwellings over the forecast period, especially with densification occurring within commercial centres. Additional housing supply has also been created owing to the relaxation of planning regulations allowing secondary dwellings, or "granny flats" with the result that, over recent years, there has been a significant increase in this type of development within older established areas with relatively large lot sizes. Consequently, many areas are expected to increase in population to some extent, driven by both infill and site-specific residential development. In contrast, areas such as Ashbury, Earlwood and Kingswood have limited development opportunities, with most future development occurring as small infill sites as opposed to larger major site. Ashbury and Hurlstone Park have large areas that are within Heritage Conservation Areas, and it is proposed to extend these controls to more areas within these suburbs which would preclude significant future redevelopment of all but a limited number of sites

Powered by .id (informed decisions) for City of Canterbury Bankstown