The City of Canada Bay is located in the inner-western suburbs of Sydney, about 6-12 kilometres from the Sydney GPO. It encompasses a total land area of 20 square kilometres, including many parks, reserves and foreshores. The original inhabitants of the Canada Bay area were the Wangal clan of the Darug Aboriginal people. European settlement dates from 1793, with land used mainly for farming. Residential growth took place during the late 1800s and early 1900s, aided by improved access and industrial growth. Significant development occurred during the post-war years. The population was relatively stable between 1991 and 1996, and then increased from nearly 54,000 in 1996 to over 65,000 in 2006 and over 80,000 in 2011. Recent growth has been largely due to the redevelopment of previous industrial sites into residential developments, particularly high density housing. Population growth is expected to continue, especially in Rhodes and along Paramatta Road. 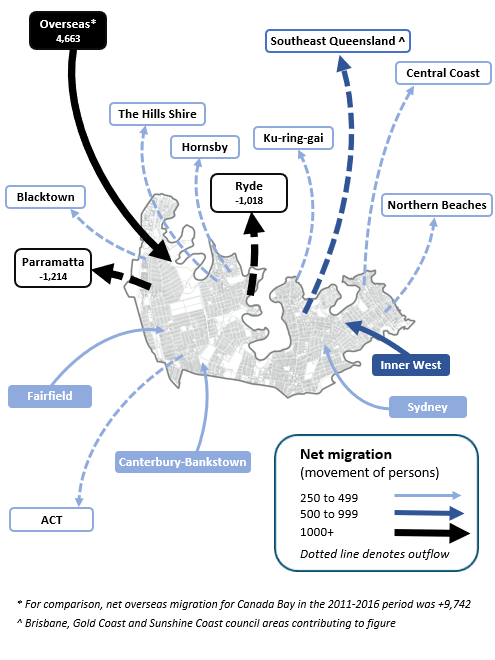 This process is heightened by the significant differences in the supply of residential development opportunities within the City which will have a major influence in structuring different population and household futures over the next five to fifteen years. Significant development sites have been identified in Rhodes, North Strathfield-Strathfield and along Paramatta Road, while future "brownfield" opportunities are likely in Five Dock-Canada Bay. Areas with rail stations, such as North Strathfield-Strathfield and Concord West are anticipated to undergo intensification of residential stock. Finally, areas such as Abbotsford–Wareemba, Russell Lea-Rodd Point, Drummoyne and Chiswick are expected to grow more moderately with most development coming from infill type developments and intensification around the commercial centres.