The Shire of Campaspe is located in north central Victoria, about 180 kilometres north of Melbourne. The largest town is Echuca, followed by Kyabram, with smaller towns at Rochester, Gunbower, Lockington and Stanhope. The Shire encompasses a total land area of about 4,500 square kilometres. Land is used mainly for agriculture, particularly dairy farming, cereal and grain growing and sheep grazing. In addition, there is significant food production in the Shire, notably Henry Jones IXL (Kyabram), Devondale-Murray Goulburn (Rochester) Nestle (Tongala) and Fonterra (Echuca and Stanhope).

The population of the Shire of Campaspe gradually increased after WW2, largely due to the construction of the dams at Lake Eildon and Lake Eppalock proving irrigated water to farmland across the Shire. The population of the Shire reached 33,800 in 1991 and almost 37,000 in 2006. However in the last twenty years population growth has been volatile, responding to structural changes in the food processing industry as well as climatic conditions. Since 2009 there has been a modest decline in the population. There are significant spatial variations in these trends with rural areas generally bearing the brunt of population decline.

The majority of the population in the Shire of Campaspe is employed in agriculture and manufacturing, while lesser numbers are involved in retail trade, health and education. As with other rural LGAs, the Shire of Campaspe is relatively self-contained in employment terms and indeed many people travel to parts of the shire from the neighbouring local government areas for work, education and services. Future changes to population will be mainly associated with employment growth or decrease in these industries.

Migration gain to the Shire of Campaspe tends to be based on families moving from Melbourne and neighbouring Shires as well as those immigrating from overseas. In common with most of regional Australia, many young people leave the Shire after completing their secondary education, with a number of them migrating to Melbourne or Bendigo for education and employment opportunities. It is assumed that a number of these patterns will continue into the future, most notably flows into the Shire from Melbourne and other surrounding rural areas and losses of young people to larger centres. 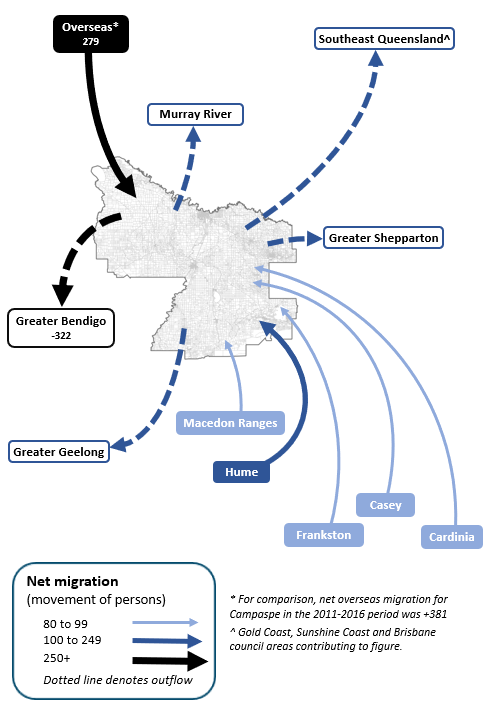 With the size of the Shire of Campaspe and its varied land use and local economy, different areas within the Shire have developed different roles in the housing market. The larger towns of Echuca and Kyabram tend to gain families and elderly people, attracted to employment opportunities and services (respectively). In addition, Echuca is a favoured area for retirees due to its high amenity, climate and range of services. Rural areas also attract families but overall the out migration of young people from rural areas is the dominant trend and this is a key driver of population decline in these areas.

The location future residential land supply within the Shire will also have a major influence in structuring different population and household futures over the next twenty-five years. Both Echuca and Kyabram have significant amounts of residential land supply and the bulk of future housing and population growth will be concentrated in these two towns. This is particularly true of Echuca (West) were there is a significant amount of future residential supply. However, the extent to which this is realised will depend on demand and developer interest. In the short term, demand is expected to remain modest in line with the trend of the post 2009 period. However over time it is assumed that demand will increase in the medium and long term to levels in line with the long term trends since 1991. In contrast, future growth in the remainder of the Shire is assumed to remain modest, with small amounts of housing growth assumed in Rochester, Lockington - Gunbower & District, and Tongala & District. However the continued out migration of young adults from these areas will dampen population growth. Overall, the population of the Shire is assumed to reach 42,130 persons at 2036.