Camden Council is a rapidly growing residential area on Sydney’s outer south western fringe. In recent years, the ABS has estimated its rate of growth as one of the fastest amongst LGAs across Australia. While it is predominantly residential, there are signficant industrial and commercial areas around Camden, Narellan and Smeaton Grange. There are also signficant tracts of agriculture in the west of the municipality, and rural residential and remnant market gardens in the north.

While European settlement of the Camden area dates from the early 1800s, the most significant period of growth in Camden Council area has been since the 1980s. In 1991, the population was 23,400, but had almost doubled by 2001 to reach 45,200. In 2011, the population reached 58,400. In the 1980s and 1990s, residential growth was focussed on Narellan Vale and Mount Annan. More recently, growth has shifted to Elderslie and Harrington Park. Residential expansion is set to continue with development fronts shifting further north along The Northern Road, along the Leppington train line and other planned growth precincts in the future.

The primary housing market role that the LGA has played is to provide affordable home owning opportunities for families and prospective families from south western suburbs of Sydney. It is assumed that a number of these patterns will continue into the future, particularly as the demand for new housing is expected to remain strong across the outer south west. In addition, the maturing of families within the LGA should provide additional demand, as children leave home to form households of their own within the Council area. 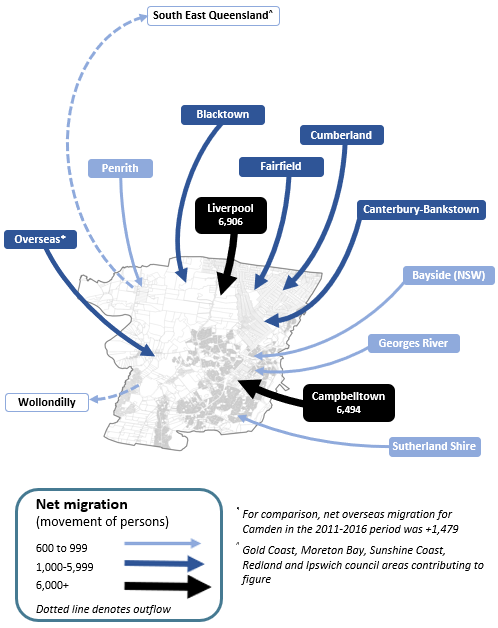 With the progressive residential development of the LGA over many decades, the large size of the municipality and the broad range of land, areas have developed different roles within the housing market. Areas such as Mount Annan, Harrington Park, Elderslie and Spring Farm have experienced significant residential development in more recent years and have been attractive to couples and young and mature families seeking new housing opportunities. It is assumed that new greenfield residential development in Oran Park, Catherine Field and Turner Road Precincts will be attractive to young families seeking relatively affordable housing. More central areas such as Camden and Narellan - Smeaton Grange attract a range of markets including young adults, established families (including second home buyers) and older persons attracted to employment, education and health care facilities in these areas. This variety of function and role of the small areas in the Camden Council area means that population outcomes differ significantly across the municipality.

Significant future residential supply has been identified across Camden Council and this too will influence housing and population outcomes. The current residential growth hotspots are Oran Park and the Turner Road Precinct, but as these areas are developed the focus will shift to new growth fronts at Catherine Field and Leppington - Leppington North. Over time, suburban development is forecast to spread along The Northern Road to Marylands and Lowes Creek, and finally to Catherine Field North in the long term. Overall, 58,675 dwellings are forecast for the period 2017-41, with a resulting population of 243,542 at 2041.