The City of Burnside is an established residential municipality located in the eastern suburbs of Adelaide. It is bounded in the west by the parklands surrounding the Adelaide CBD, and in the east by the Adelaide Hills. The dominant form of land use in the City is low density housing, some of which has heritage and conservation attributes. Commercial areas are concentrated along major arterial roads and there is a regional shopping centre at Burnside (Burnside Village). Glenside-Eastwood is one of the few suburbs where non-residential land uses are significant, exemplified by the Glenside Campus of the Royal Adelaide Hospital (currently being redeveloped), and commercial/office strips along Greenhill Road and Glen Osmond Road. Viticulture is still undertaken in Rosslyn Park (Penfolds Winery) and there are extractive industries in the Adelaide foothills at Stonyfell.

Early residential development in Burnside was focussed around farming activity (including viticulture) and the establishment of villages at Burnside and Magill. As Adelaide grew outwards, farms made way for suburban development. The proximity of the City to the Adelaide CBD, as well as the amenity of the area, meant that much of the municipality was settled by the mid 20th century. These older houses, as well as the leafy streetscapes, provide the City with its distinct residential character and there are extensive tracts of heritage areas. Population and dwelling change in the City has been relatively stable over the last 20 years, reflecting the established nature of residential settlement and lack of strategic redevelopment sites.

The City attracts people due to its natural amenity (both natural and built), access to good secondary schools and in the west, proximity to the Adelaide CBD. The major loss of population from the City comprises young adults, generally those who are leaving the family home after completing tertiary study, to other parts of Adelaide and interstate to Melbourne. Generally, there is minimal population change through migration at age 50 years and over, however this can be influenced by the development of retirement villages and similar housing opportunities. 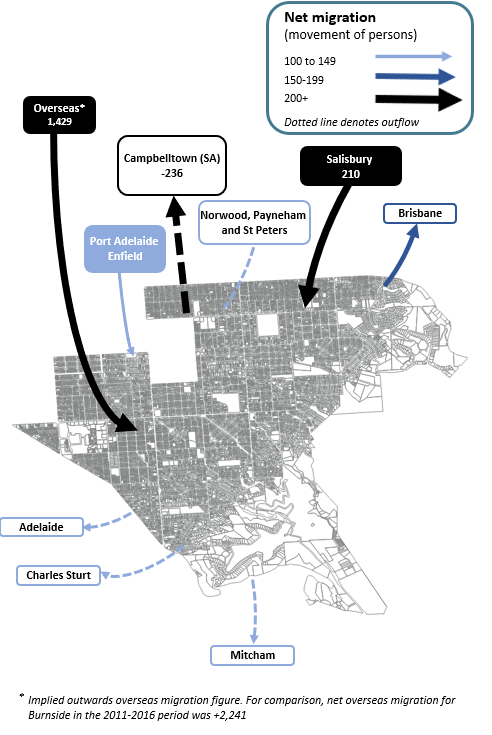 The primary role and function played by the City has been to provide housing for mature families, generally second or third home buyers, from the surrounding suburbs of Adelaide, other parts of Australia, and overseas. In addition to the amenity of the area and the proximity of the CBD, a major attractor for mature families is the presence of a number of private schools. As an established part of the Adelaide metropolitan area, many parts of the City are in the process of, or are undergoing suburban regeneration. However, the amenity of the area influences older people to stay in the area, and there are increasing opportunities for downsizing as well as a large number of aged accommodation facilities to cater for this demand.

Future growth and change in the City of Burnside is largely influenced by a relative lack of strategic development sites as well as limited opportunities for dwelling gain through subdivision and infill. Regardless, in the main it is infill opportunities that will comprise the bulk of new dwelling supply to 2041. Outside of the Glenside redevelopment, most dwelling gain will be via through infill development, but in most suburbs the overall increase is quite modest. In 2020 the population was approximately 47,000, and this is forecast to increase to just under 51,000 by 2041. This represents an annual average growth rate of 0.5% over the 25 years, higher in the inital 10 years at 0.8%, influenced by the build out of Glenside, before dropping back to a steady 0.3% for the remainder of the forecast period.

Powered by .id (informed decisions) for City of Burnside