The City of Brimbank went through its first rapid growth phase after the Second World War with the development of many suburbs around the original settlements at Keilor, Sunshine and St Albans. The primary housing market role that the City of Brimbank played during this period was to provide home owning opportunities for families and prospective families within the western suburbs of Melbourne. Rapid growth took place during the 1970s and 1980s. The population increased during the 1990s, with growth continuing between 2001 and 2011. The population grew from about 137,000 in 1991 to about 182,000 in 2011. Much of the growth during this period has been in Delahey, Sydenham and Taylors Lakes, and more recently in Cairnlea, Deer Park and Derrimut.

The importance of the City of Brimbank within the western suburban housing market of Melbourne has continued. The attraction of the area is a reflection of the amount of affordable housing relatively close to Central Melbourne and increasing transport options for commuters (e.g. rail network upgrades).There is significant pressure for residential expansion within Brimbank from both existing residents and from migrants, most notably from overseas, as well as areas to the east (in particular the Cities of Maribyrnong and Moonee Valley).

It is assumed that a number of these patterns will continue into the future, notably flows into the City of Brimbank from the east and from overseas, as well as loss of population to areas within Melton Shire (Caroline Springs, Taylors Hill etc.) and the affordable housing options within the City of Wyndham. As residential opportunities are exhausted in Deer Park, Derrimut and Delahey, newer areas of growth in other parts of the City of Brimbank, such as Sunshine, Sunshine North, Sydenham-Hillside, Cairnlea and St. Albans will increase in importance. The Sunshine town centre, in particular, is expected to see much residential growth due to demand and strategic planning of the centre. 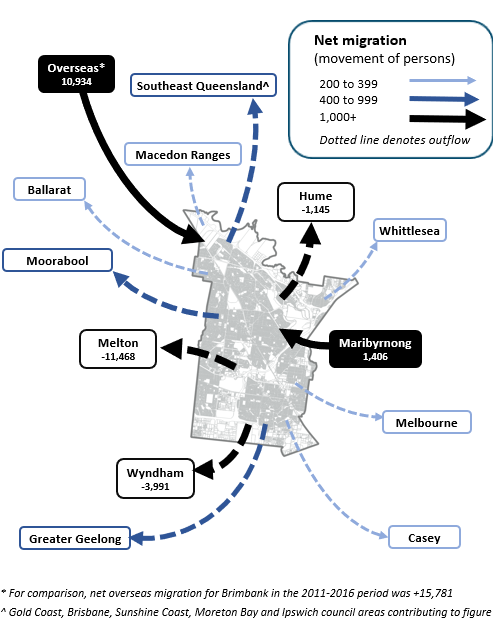 The attraction of the area is a reflection on the significant amount of residential housing opportunities and the affordability of the area, relative to areas closer to central Melbourne. Local demand is relatively strong as the age structure of the City is conducive to producing large number of new households. This is due to the fact that there are large numbers of older children (late teens, twenties and even thirties) expected to leave home over the coming years. An increasing proportion of young professionals commuting to Central Melbourne for employment is expected in Sunshine and some of the other town centres during the forecast period.

With the varied development phases and the overall size of the City, different areas within Brimbank have developed different roles within the housing market. Areas such as Keilor and Taylors Lakes are attractive to mature families looking to upgrade to their second and third home. Albion, Sunshine and St Albans have a significant component of rental housing, which attracts a large share of overseas migrants, as well as a more youth-oriented market, seeking affordable housing opportunities. Cairnlea, Derrimut (namely the Brimbank Gardens greenfield area) and Deer Park are just completing their rapid suburban growth cycles, while other areas such as Albanvale, Kings Park and Keilor Park were developed rapidly in previous decades. The variety of function and role of the City of Brimbank’s suburbs means that population outcomes differ significantly across the municipality.

There are also significant differences in the supply of residential property within the City which will also have a major influence in structuring different population and household futures within the City over the next five to ten years. New ’greenfield’ opportunities have been identified in Delahey, Cairnlea and Sunshine West while there are some more moderate opportunities in St. Albans West and Taylors Lakes (West) and District, for example. Other areas such as St Albans (East) and Keilor-Taylors Lakes (East) are expected to have some growth in dwellings, but based predominantly on infill of vacant lots and more intense use of land. The Sunshine, St Albans and Sydenham town centres (predominantly the Sunshine and St Albans town centres) are also expected to experience significant in-centre residential development over the forecast period.

Powered by .id (informed decisions) for City of Brimbank