The City of Blue Mountains is a residential, resort and rural municipality on the western fringe of metropolitan Sydney between 55 and 95 kilometres west of the Sydney GPO. The City’s area is dominated by over 1,000 km2 of World Heritage National Park. This comprises around 70% of the City’s area. Urban development in the City is characterised by a string of townships based on the rail and road corridor through the mountains.

Early development in the Blue Mountains dates from 1816-1817, when a series of military posts were established to protect travellers heading to Bathurst. The construction of the railway in the 1860s was instrumental in opening up the mountains for settlement, with railway stations established adjacent to popular inns. Early centres of population were generally in the lower mountains, with Springwood being home to around 500 people at the start of the 20th Century. Katoomba was established in the 1870s with development driven by shale and coal mining. With the advent of the motor car, the upper mountains became a popular destination for Sydneysiders and large numbers of guest houses were established to cater for tourists. The City experienced significant growth in the post war era as employment growth in western Sydney encouraged the settlement of commuters, particularly in the lower mountains. This has generally been focussed in the townships of Springwood, Glenbrook, Blaxland and Winmalee area. Population growth in the City has in part been driven by the increase in occupancy over the last twenty years as holiday houses have been converted to permanent occupancy. The City continues to accommodate significant numbers of tourists. 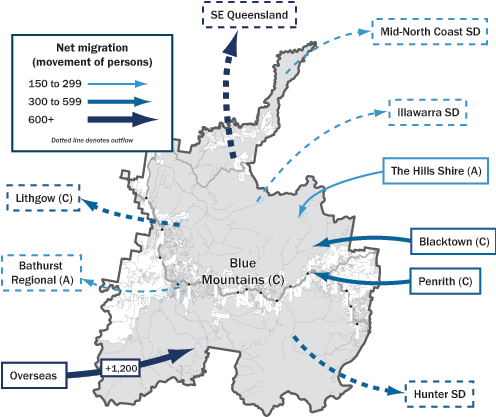 The primary housing market role that the City played over the last twenty years has been to attract young families and retirees, particularly to the lower mountains. Residential development in the City is expected to decline significantly. This is a result of declining stocks of residential land with the ability of townships to expand hindered by important bushland and bushfire risk.

The City comprises significant diversity in terms of residential and economic role and function. The upper mountains, including Wentworth Falls, Katoomba and Blackheath have large numbers of dwellings that are only occupied part time. These areas are generally outside commuting distance to major employment centres in western and central Sydney, and it assumed that much of their future demand will come from people in the retiree age groups. Areas in the lower mountains such as Blaxland, Glenbrook and Springwood have played more of a ‘suburban’ role in attracting young families, their access to employment in western Sydney a key attribute. As a whole, Blue Mountains City will continue to consistently attract established families aged 30-39 years old with children aged 0-9 years. There is a loss of young adults in their late teens and early twenties who leave the City to search for employment and education opportunities in Metropolitan Sydney and elsewhere. As Blue Mountains City continues to be a popular retirement area, there will be varying degrees of gains of both the early retirees age group (50-64 years) and retirees aged 65-74 years. This variety of function and role of the small areas in Blue Mountains City means that population outcomes differ across the LGA.

There are also differences in the supply of residential land within the City which will also have a major influence in structuring different population and household futures over the next five to twenty years. Larger redevelopment sites in Katoomba - Medlow Bath, Blaxland, Blackheath - Western Townships, Springwood - Valley Heights and Leura will be the major source of additional dwellings and households in the City in the short term while medium density development around designated transit nodes will provide the bulk of dwelling growth into the future. By contrast, some of the suburbs in the lower Mountains have limited ability to add new dwellings and as a result, are expected to experience population decline over the forecast period resulting from children leaving home and an ageing population. These forecasts account for the bushfire events which occured in Winmalee - Yellow Rock in October 2013. The dwelling demolitions associated with the bushfires, subsequent dwelling rebuilds, temporary loses of population (of those who lost their homes), reallocations within Blue Mountains City and outside the LGA, as well as ensuing re-housing of residents in Winmalee - Yellow Rock in the years following the bishfires