Blacktown City is a predominantly residential, commercial, and rural Local Government Area (LGA) in Sydney's west. In terms of population, the City is the largest LGA in New South Wales. In the post war era, and particularly in the last 40 years, the City has catered for a significant proportion of Sydney’s demand for new housing on the urban fringe. This role is expected to continue as large areas in the north of the City have been identified for urban development over the next 20-30 years. The City has also established itself in recent decades as a major employment hub in western Sydney, capitalising on transport infrastructure such as the Western Motorway (M4), Westlink (M7) and the Hills Motorway (M2). Employment growth is expected to continue, with new areas identified for development.

Blacktown City has increased significantly in population since the Second World War. In 1947, the population of the City was 18,000 with most growth focused around Blacktown and smaller villages along the railway lines. In the 1960s and 1970s, large scale housing development projects were undertaken in the areas to the north of Mount Druitt as well as areas around Blacktown itself. In the last twenty years, significant development has occurred in suburbs such Glenwood, Oakhurst, Plumpton, Glendenning and Stanhope Gardens.

The primary housing market role that the City played in the post war period has been to provide affordable home owning opportunities for families and prospective families from areas to the east as well as migrants from overseas. This role is expected to continue with additional areas of the City being identified for future urban development over the next twenty years. Kellyville Ridge, The Ponds, Colebee and Ropes Crossing are all recently developed suburbs, with limited development opportunity over the forecast period, whilst Riverstone, Schofields, Marsden Park, Tallawong and Shanes Park are all areas that are currently developing with very significant potential yields over the forecast period of approximately 84,000 dwellings. Additionally, there is expected to significant densification within existing centres such as Blacktown and Mount Druitt, and around transport hubs such as the station precinct in Seven Hills. In the longer term there is further greenfield capacity within the small area of Angus - Richards - Vineyard West. The City will continue to cater for a significant amount of metropolitan Sydney’s demand for greenfield land. 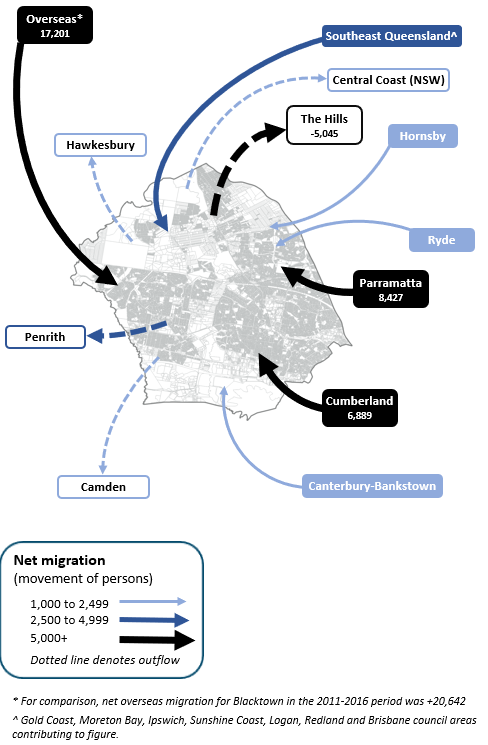 With the variety of residential areas, natural characteristics and period of development, different areas within Blacktown City have developed different roles within the housing market. Many established areas such as Kings Langley, Acacia Gardens and Parklea are experiencing significant net loss of persons in their 20s. These are the children of families that settled in these areas in the 1970s and 1980s and, in the latter examples, the 1990s. This cohort is now at the stage where they are looking to establish new households elsewhere. Many of these new households will be heading to growth suburbs such as Marsden Park, Schofields, Riverstone and Tallawong. The newly developed areas of Kellyville Ridge, The Ponds and Ropes Crossing, in contrast, have little development opportunity remaining and are starting to lose families upgrading to larger housing to meet changing circumstances. Whilst these areas continue to attract young families and young homeowners, opportunities to move in are limited to when existing housing becomes available on the market. These areas will experience population loss and a decline in average household size as the population that moved in during the growth phase ages in place, with younger adults leaving home, smaller households forming as adult children move out, and older 'empty-nester' households downsizing elsewhere in the metropolitan area, or moving to regional New South Wales to enjoy life-style opportunities. Major centres such as Blacktown and Mount Druitt by contrast attract young adults who are seeking access to employment and transport. These areas also have a much larger stock of medium density and rental stock. The major growth areas of the City are expected to attract a predominantly young family market. This includes areas such as Marden Park, Tullawong, Riverstone and Schofields. Colebee, in contrast, which is nearing the end of its growth phase, has attracted a slightly older family market with adults in their 30s and 40s, often with teenage children. This variety of function and role of the small areas in Blacktown City means that population outcomes differ significantly across the LGA.

There are also significant differences in the supply of residential property within the City which will also have a major influence in structuring different population and household futures over the next five to twenty years. Large new "greenfield" opportunities have been identified in the growth areas. These are predominantly located in Schofields, Riverstone, Tallawong, and Marsden Park. These areas and future release areas in Angus-Richards-Vineyard West will continue to undergo significant development with the future release of further "greenfield" sites. Significant in-fill development opportunities in Blacktown and Mount Druitt are also expected to contribute significant numbers of new dwellings. By contrast, the established suburbs north of Mount Druitt are expected to provide relatively low numbers of new dwellings over the forecast period.