This forecast has been commissioned as a result of the proposed merger of the Municipalities of Burwood and Strathfield and the City of Canada Bay (hereafter referred to as the area) located in the inner west of Sydney. The future Council area lies about 6-14 kilometres from the Sydney GPO, encompassing older industrial areas, major road and rail infrastructure, parks, reserves and foreshores. The most significant period of development occurred during the post-war years, with population doubling between 1947 and 1954 from 58,180 to 116,350 persons. Growth following this development phase. The population declined by roughly 9,000 over the ensuing years to 1991, as the population grew older and people moved outwards to new growth areas to the west of the area. Since 1996 the area has undergone very significant growth from 107,770 to 128,250 persons in 2006, and almost 173,210 in 2016. Recent growth has been largely due to the redevelopment of former industrial sites into residential developments, particularly high density housing, and intensification around main stations. Population growth is expected to continue, especially in Rhodes, Homebush and along the Parramatta Road corridor.

The primary housing market role that the area has played in the post war era has been to provide housing for families. This role continues, although increasingly a number of suburbs attract predominantly young singles and couples due to the higher density housing stock. There has been considerable conversion of industrial land to apartments in Rhodes and town house developments in Liberty Grove and Breakfast Point. The conversion of industrial land to new residential housing (especially higher density forms) is a pattern that is set to continue into the future, with future opportunities for "brownfield" development. In addition, in the mid to longer term, it is expected that there will be greater intensification of housing around the rail stations in Burwood, Concord West, Croydon, Homebush, North Strathfield and Strathfield, as well as the continued conversion of old industrial land to higher density residential. The significant amount of development that has occurred has attracted overseas migrants, as well people from inner western councils. In net terms, the area attracts young adults in their late teens and twenties and loses younger families.
Historical migration flows, Burwood - Canada Bay - Strathfield, 2011-2016 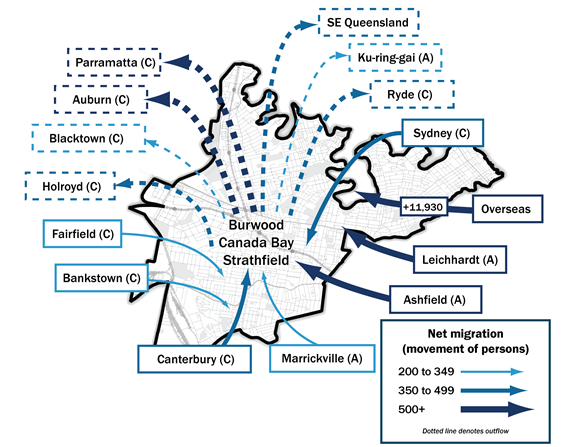 Within the area, the different suburbs have developed and will continue to evolve distinct roles within the housing market. Variations occur due to when areas were settled, the range of land uses in the area, developer interest and the varying planning policies in play. Rhodes, Liberty Grove, Strathfield, Abbotsford-Wareemba, Burwood, Drummoyne, Chiswick, Homebush, Homebush West, Strathfield South and Russell Lea-Rodd Point tend to attract people in their late teens and twenties due to the higher share of rental stock (apartments) and (in some cases) proximity to rail links and other services. Belfield-Greenacre, Concord, Cabarita, Concord West, Croydon-Burwood Heights, Croydon park and Enfield continue to attract established and mature families. Five Dock-Canada Bay tends to attract young professional couples and singles without children, whilst Mortlake-Breakfast Point, with the development of Breakfast Point, attracts a mixed market, including "empty-nester" households, mature families and younger smaller households. With a greater share of development likely to be higher density apartments, a greater share of young adults living in smaller households is expected over the forecast period.

This process is heightened by the significant differences in the supply of residential development opportunities within the City which will have a major influence in structuring different population and household futures over the next five to fifteen years. Future significant development sites remain in Rhodes and Mortlake-Breakfast Point, while in many parts of the area, future "brownfield" redevelopment opportunities are likely along Parramatta Road corridor (principally in Five Dock-Canada Bay, Homebush and Strathfield), old industrial areas within Strathfield (the ‘Bakehouse Quarter’) and Homebush, and along Liverpool Road corridor in Strathfield South. Areas with rail stations, such as Strathfield, Homebush, Burwood and Croydon are anticipated to undergo further intensification of residential stock. Finally, areas such as Abbotsford–Wareemba, Russell Lea-Rodd Point, Belfield-Greenacre, Cabarita, Enfield, Drummoyne and Chiswick are expected to grow more moderately with most development coming from infill type developments and intensification around the commercial centres.