Baw Baw Shire is a semi-rural municipality located in the West Gippsland region of Victoria, about 100 kilometres east of the Melbourne CBD. The main towns are Drouin, Warragul, Trafalgur, Longwarry, and Yarragon, all of which are located on or near the Princes Highway and the Gippsland railway line, in the south of the shire. These towns support the productive agricultural areas in their surrounds.

In the mountainous North of the municipality, there are tourist attractions including Baw Baw National Park, Baw Baw Ski Resort, and the historic gold-mining town of Walhalla. There is also some forestry in the north of the shire.

The original inhabitants of Baw Baw Shire were the Kulin and Kurnai Aboriginal people.

European settlement dates from the 1860s, with land used mainly for farming and timber production, and mining in some areas. The population began to grow in the 1870s, and accelerated in the 1890s, spurred by the opening of the Gippsland railway line. Expansion continued during the early 1900s, particularly in the townships nearest the railway line. Growth took place in the larger townships of Drouin, Trafalgar and Warragul during the post-war years. Several water storage facilities were constructed, particularly during the 1970s. The population of the Shire gradually increased from the 1990s, with more substantial growth from 2006.

Most of the recent growth has been in Drouin and Warragul, which are key service centres for the agricultural hinterland.

In recent years, Melbourne’s South Eastern growth corridor has continued to develop outwards, ever closer to Baw Baw Shire. At the same time, property prices in Melbourne have been rising, and there have been some improvements to transport links to Melbourne. This has made towns such as Drouin more attractive to people with strong links to Melbourne, but who are looking for housing that is less crowded and more affordable than Melbourne.

The population is projected to continue to grow as Baw Baw continues to attract new residents for the reasons outlined above.

Baw Baw attracts significant net migration from the south-eastern suburbs of Melbourne, particularly the LGAs of Cardinia and Casey. Many of those moving out to Baw Baw are seeking a quieter and more affordable place to live that is still close to Melbourne. This includes young families and older ‘tree-changers’. Baw Baw also attracts population from nearby rural LGAs, including LaTrobe, which highlights the strong regional role Warragul and Drouin plays in terms of jobs and services.

Baw Baw loses young adults, particularly to central Melbourne, where they are seeking education and employment opportunities that are not available in Baw Baw. 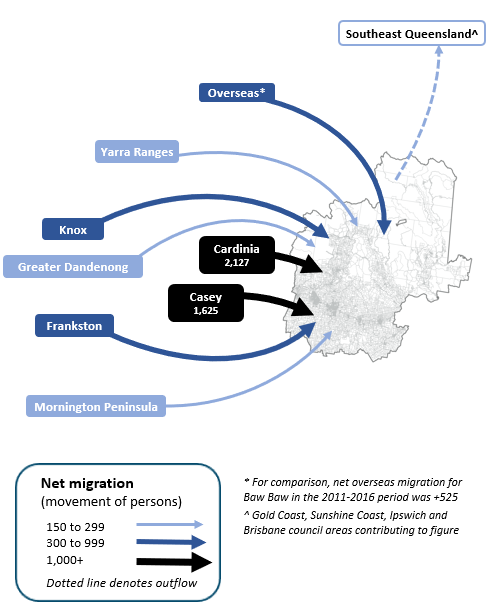 Baw Baw shire tends to attract young families with children, mostly from south-eastern Melbourne, who are drawn to the relatively affordable, family-friendly homes. Mature ‘tree-change’ households in their forties, fifties and sixties, with or without children, also mostly from Melbourne, are attracted to the rural lifestyle and more affordable dwellings. These households are particularly attracted to areas such as Drouin North, with larger ‘lifestyle’ blocks and more expensive homes.

Drouin and Warragul Precinct Structure Plans will facilitate significant residential development around the edges of the current developed area. Trafalgur, Longwarry, and Yarragon also have identified capacity for suburban growth.

Most of the rest of the LGA will see only limited change, with some infill development in smaller settlements and some rural residential development.This will facilitate the significant growth of households from almost 20,000 in 2016 to almost 34,000 in 2041, with 80% of this growth being in Warragul and Drouin.