Population was minimal until the 1850s and 1860s when the township and several smaller towns developed, spurred by gold mining. Expansion continued during the 1870s and 1880s, aided by the construction of the railway line from Sydney and further gold discoveries. Growth resumed during the immediate post-war years, then the population stagnated during the 1950s and 1960s. Gradual growth took place from the 1970s, primarily in the township. The population of the Council area continued to steadily increase from the 1990s, with the population increasing from less than 32,000 in 1991 to about 42,000 in 2016.

Recently, the Bathurst Regional Council area has played two primary housing market roles, drawing both families and young adults to the area from the surrounding Local Government areas and from the fringe of Western Sydney. While the in-migration of families is driven by the ready supply of residential land in the outer suburbs of Bathurst, the young adults are more often attracted to the education, transport, employment opportunities available.

The importance of the Bathurst Regional Council area as a destination for both families and young adults is expected to continue over the forecast period. New residential development opportunities in Kelso (North) - Laffing Waters and Eglinton will cater for an increase in families to the area while continued ‘infill’ development in Bathurst (Central) and West Bathurst provide drive household growth for young adults. 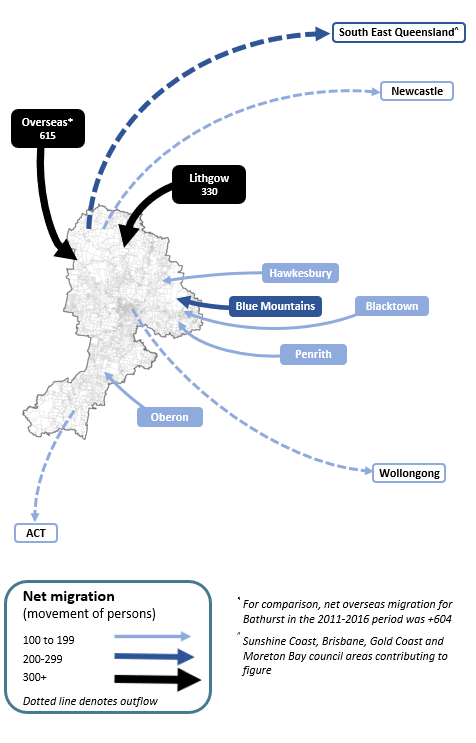 With the variety of residential and rural locations, different areas within the Bathurst Regional Council area have developed different roles within the housing market. Areas on the outskirts of Bathurst such as Kelso, Abercrombie - Llanarth, Windradyne and Eglinton are attractive to both young and mature families as well as some retirees. Bathurst (Central) and West Bathurst have a significant component of medium and high-density housing, which attracts a large share of younger adults to these areas, while Mitchell - Robin Hill - Mount Panorama, South Bathurst - Gormans Hill - White Rock and Rural Remainder offer larger lots of 'rural residential' options that attract are more mature family market. These varieties of function and role of the small areas in the Bathurst Regional Council area means that population outcomes differ significantly across the LGA.

There are also significant differences in the supply of residential property within the LGA which will also have a major influence in structuring different population and household futures within the Bathurst Regional Council area over the next five to ten years. Significant new 'greenfield' opportunities have been identified in Kelso and Eglinton. Older parts of the council area like Bathurst (Central), West Bathurst and some parts of South Bathurst are expected to experience continued levels of residential regeneration or ‘infill’ development. Other small areas such as Kelso (South), Mitchell - Robin Hill - Mount Panorama, Raglan - Perthville and South Bathurst - Gormans Hill - White Rock are expected to have lesser growth in dwellings, based predominantly on the development of vacant lots and/or more intense use of land.