The City of Armadale is located on the fringe of the Perth metropolitan area, about 20 kilometres south east of the Perth GPO. The City’s land use is predominantly divided into three areas. There are the older established parts of the City along the Albany Highway-Railway corridor, based around the historical townships of Armadale and Kelmscott. Areas to the east are more undulating, with horticultural activities and rural residential development more prominent, as well as predominantly State Forest and water catchment areas in the most eastern parts of the City. The western areas of the City contain large areas of wetlands and lakes, and are now the location of significant greenfield development with the commencement of building in the localities of Hilbert and Haynes.

The City of Armadale’s population grew substantially in recent decades, with the population growing at more than 2.5% per annum during the 1980s. However, population growth slowed during the early 1990s. The total population, during this period and the early 2000s, was relatively stagnant at just over 52,000, owing to increased development in the south-west corridor of Perth and greenfield development in the City of Gosnells and the maturing of the age structure of the population within the City resulting in more young people leaving the family home and establishing households elsewhere.

Since commencement of residential development in Harrisdale and Piara Waters around 2007, these patterns have changed markedly. The availability of large tracts of greenfield land in Gosnells and Canning has declined as greenfield sites are now fully developed, but for small remnant parcels. Residential development has also undergone a period of boom during the period since 2011, reflecting increased demand for housing in Perth as a result of increased overseas and interstate migration fuelled by the mining boom. This has been apparent with the large increase in development approvals within the City of Armadale and the rapid development of Piara Waters and Harrisdale, where most available land is expected to be fully developed over the next 5 to 10 years. Consequently, the earlier large net losses to neighbouring Local Government Areas such as Gosnells, Kalamunda and Rockingham experienced in the 2001-2006 period have slowed significantly and, in the cases of Gosnells and Canning, have been reversed as development opportunities have provided a broader range of housing within the City of Armadale. The migration flows within the City of Armadale also reflect where the supply of residential land is located (destination) and where young people have grown up and left home (source).

Despite the availability of greenfield development opportunities - Champion Lakes, Piara Waters and Harrisdale over the short-term, and Haynes, Hilbert and Wungong over the mid to longer term period - the recent rate of development within the City is unlikely to be sustained over the near future. With the scaling down of investment in the mining sector and competing residential development areas in neighbouring areas such as Serpentine Jarrahdale, residential development rates are expected to slow and it is expected that the wider Perth area will move from a situation of an under-supply of dwellings to an over-supply; however, that said, it is expected that development within the City will continue at relatively significant rates over the next ten years, albeit lower than experienced within the last 5 years. 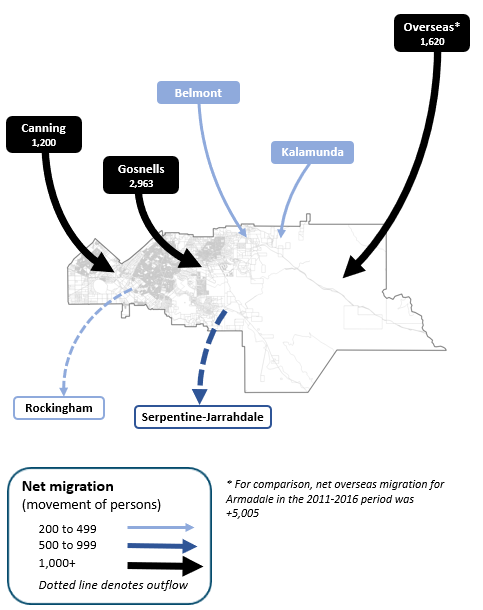 With the progressive residential development of the City over many decades, the availability of land for development and the broad range of land uses, areas have developed different roles within the housing market. The small area of Armadale South continues to attract a large number of persons in their late teens and early twenties, which is a reflection on the increase in medium density dwellings and a growing rental sector close to the services in central Armadale. Some of areas, such as Roleystone - Karragullen, Kelmscott East, Mount Nasura-Mount Richon and Bedfordale are attractive to established and mature families looking to upgrade to their second and third home. Areas such as Camillo have had significant residential development in recent decades and are losing a large number of established families seeking new housing opportunities elsewhere, a process likely to affect Seville Grove in the longer term. Recently developed localities such as Piara Waters, Harrisdale and Champion Lakes have proved attractive to first home buyers and ’upgrader’ markets, providing a greater degree of housing choice and availability than elsewhere in the City. These areas, however, are likely to be fully developed over the next ten years, with "Wungong Waters" taking over as the main growth front; indeed, development in Hilbert has already proceeded rapidly since commencement in 2012. This variety of role and function of the small areas in Armadale means that population outcomes differ considerably across the City.

There are also significant differences in the supply of residential property within the City which will also have a major influence in structuring different population and household futures over the next five to twenty years. Although ’greenfield’ opportunities within Piara Waters and Harrisdale will be exhausted in the short-term, the "new" growth areas of Haynes and Hilbert will continue to fuel significant population growth. Areas such as Seville Grove and Champion Lakes also continue to provide significant, albeit smaller, development opportunities and it is possible that further land will be rezoned in areas adjacent to existing urban areas. Additional dwelling growth can also be expected through rural residential development in the hills areas. Within the older, urban areas of the City (Armadale North and South and Kelmscott East and West), there continues to be substantial group housing / unit development through infill and it continues to be a strategic aim to encourage more medium and higher density type development within the centre of Armadale to enhance the city centre. In contrast, areas such as Camillo and Mount Nasura-Mount Richon are likely to have very low levels of residential development by comparison with recent decades due to scarcity of greenfield land and redevelopment sites for development.

Powered by .id (informed decisions) for City of Armadale