Albury is located in southern New South Wales, about 460 kilometres from Sydney and 260 kilometres from Melbourne. The City, along with its near neighbour, Wodonga in Victoria, is located in a strategic location on the main Sydney-Melbourne freeway and railway. The history of residential development in Albury dates back to the 1830s, when a town was established at the major river crossing. The town became an important river port, shipping wool, wheat and wine along the Murray to South Australia. The opening of the railway to Melbourne saw the end of the river transport. The town has expanded rapidly in the post war period, assisted in part by the Albury-Wodonga region being designated as a national growth centre in the 1970s. In this period, a number of manufacturing industries were attracted to the area and the subsequent economic development has seen the population more than double between the 1940s and 1980s, reaching 37,000 by 1981. In this period many new suburbs were developed such as Lavington, North Albury and in later years Thurgoona.

Albury has had a slightly increasing population through the 1990s and 2000s, with much of this growth sourced from migrants from the surrounding rural and regional LGAs. Similar to most rural and regional centres, the City also loses persons to Melbourne in net terms, most notably young adults moving to study or to access employment. The City also lost persons in net terms to South East Queensland over this period.

It is assumed that a number of these patterns will continue into the future, most notably flows into the City from surrounding areas. The migration flows within Albury are expected to reflect where the supply of residential land is located (destination) and where young people have grown up and left home (source). 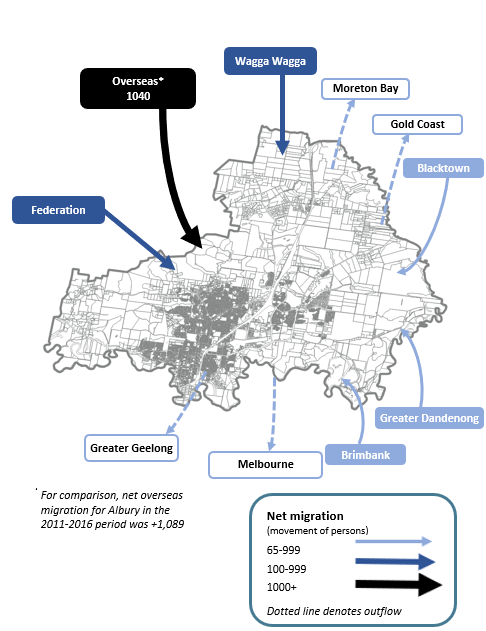 With the progressive residential development of the City, the availability of land for development and the range of land uses, areas have developed different roles within the housing market. The central areas (Albury, East Albury and South Albury) attract a large number of persons in their late teens and early twenties, attracted in part by the availability of rental accommodation, employment and entertainment. Some areas, such as Glenroy, Lavington and West Albury play a more traditional family role and are expected to attract families with children while experiencing some net loss of young adults and school leavers. New greenfield areas in Thurgoona attract a range of young and mature families seeking to upgrade their dwelling or establishing new households. Thurgoona is also likely to attract persons in their late teens following the establishment of student accommodation on the Charles Sturt University Campus. The more rural parts of the City are also attractive to families seeking a rural environment and a new lifestyle. This variety of function and role of the small areas in the Albury means that population outcomes differ significantly across the municipality.

There are also significant differences in the supply of residential property within the City which will also have a major influence in structuring different population and household futures over the next five to twenty years. Large new greenfield opportunities have been identified in Thurgoona. There is also development expected in Glenroy, Hamilton Valley and Springdale Heights. There are likely to be other greenfield, rural residential and most notably infill development opportunities throughout the City, albeit at lower levels than the major growth areas identified above. Infill development is expected to be concentrated in existing areas such as Albury, Lavington and North Albury.