The City of Adelaide was laid out as the capital of South Australia in 1836. Over time, the City has developed from colonial settlement to village to town to major city. The role and function of the City of Adelaide had its origins as a predominantly residential and commercial area. The City declined in population in a similar fashion to other Australian central city local government areas in the middle part of the 20th Century as industry and commerce became more profitable land uses resulting in residents moving to areas outside the central city. In recent times, this decline has turned around as a result of residential opportunities, epitomised by the construction of high rise apartment buildings in the city centre. This has resulted in strong population growth.

The large growth in population is a result of the attraction of inner city living for tertiary education, employment opportunities and entertainment. This trend is expected to continue into the future. The City of Adelaide also attracts a large number of overseas migrants. These migrants are primarily made up of students studying at the University of Adelaide, the University of South Australia and other educational institutions in the inner area of Adelaide.

The City also attracts people from the outer suburbs of Adelaide, many of these being young people studying or moving to the central city for lifestyle and/or employment reasons. The City of Adelaide has in recent times experienced a net loss of migrants to both Melbourne and Sydney, and to a lesser extent – Perth, with many of these likely to be young people, notably recent graduates, seeking new or better employment opportunities in larger centres. The City also loses people to inner suburban areas such as Unley, Prospect and West Torrens. Many of these people are moving further out to find affordable rental dwellings, trading accessibility for space or to find appropriate housing when the time comes for child-rearing. 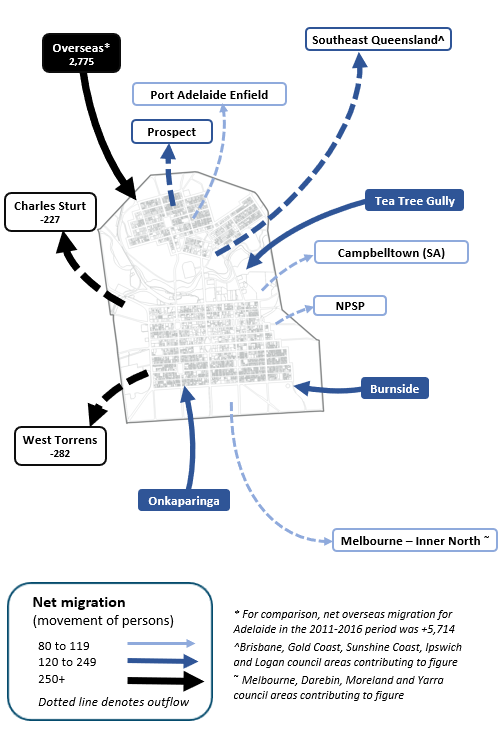 The types of dwellings constructed in the City over recent years goes some way to determining the types of households. Most construction has been in the form of high density apartment buildings, which typically consist of one or two bedrooms. These types of dwellings are more suited to smaller households, and as such the housing market has been dominated by young singles, couples and students ie group households, couple households and lone person households. Media driven myths about "empty nester" demand for inner city living in high density apartments are largely unsupported by data analysis.

A particular challenge for forward planning in the City of Adelaide is the volatility of the housing market. Due to the size of construction projects, several factors influence when dwellings are constructed and then available for habitation. These include the investor market, general economic conditions (particularly finance from lending institutions) and policy shifts at both the local and national scale. Nevertheless, significant opportunities for future dwelling supply have been identified. CAD West, CAD East and City South are assumed to add the most dwellings over the forecast period, with comparatively little development in North Adelaide. The majority of new dwellings that are expected to be built over the 2011-2041 period are apartments, and as such, households are assumed to be relatively small in size ie couple only or lone person households. From a 2016 population of 23,396, the forecast population at 2036 is assumed to reach 37,721, or approximately 2.4% per annum.

Powered by .id (informed decisions) for City of Adelaide